What Is a Party?

Update Required To play the media you will need to either update your browser to a recent version or update your Flash plugin.
By Dr. Jill Robbins
25 June 2021


Hello! Summer in the United States is a popular season to hold outdoor celebrations. Today, we answer a question from Egypt about the word "party." 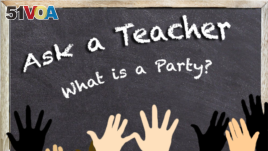 This word "party" has many meanings. It changed according to the context. Please give me more details and examples.

That is a great word to learn. You probably learned first that "party" is a noun meaning a celebratory social event. When we have a party, we invite people to gather. Usually, we serve food and drinks. We might also play music, sometimes for dancing. We also sometimes set up games or other fun activities for our guests. Here is an example sentence using party defined that way:

I'm having a Fourth of July party – would you like to come?

During election campaigns, a political group may ask you to vote for its candidate for a government office. Such groups are also called parties. A party is a group of people working together for a political purpose. Here is an example:

A related word is "partisanship." It means loyalty to one's political party. When the two parties agree on something, it is called "bipartisanship." An example of this was last week's vote by every member of the U.S. Senate – in both parties – to make a new federal holiday.

The U.S. Senate showed bipartisanship in a vote by all members to make June Nineteenth a federal holiday.

When lawyers write a contract, they use "party" to describe the people or groups involved in the legal case. They may say,

Both parties must agree to any changes in this contract.

Another more formal use of "party" is to describe any one person or group. At a restaurant, the host may announce,

A table is ready for a party of four.

When 191 countries signed the Paris Agreement on climate change, they became "Parties to the agreement."

Just anyone can be a party

The word "party" sometimes appears where you could also use "anyone" or "a person."

Interested parties may now buy tickets for the school concert.

I bought my car from a private party on the internet.

A group with a purpose

In disasters, you may hear reports of a "rescue party" or a "search party" going to help the victims.

After the earthquake, many countries sent special search and rescue parties to help find the victims.

One note: these are all definitions of party as a noun. People also use it as a verb meaning celebrate. Listen to this example:

When COVID-19 stops spreading, my friends and I are going to party together --- in person!

Thanks for writing us, Taha!

host – n. a person who is entertaining guests socially or as a job