What Is Chronic Fatigue Syndrome?

Update Required To play the media you will need to either update your browser to a recent version or update your Flash plugin.
By John Russell
12 January 2020


Chronic fatigue syndrome is one of the most troubling mysteries in modern medicine. Many years after first recognizing the disorder, researchers still do not know what causes it.

Now the United States' National Institutes of Health is using volunteers in a unique study. The goal is to learn more about the condition, which affects an estimated 2.5 million Americans. 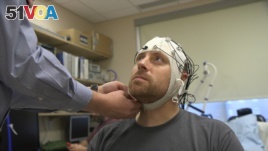 In this Nov. 20, 2019 image from video, Zach Ault is fitted with an EEG cap which uses electrodes to track the electrical activity of his brain, at the National Institutes of Health's hospital in Bethesda, Md. (AP Photo/Federica Narancio)

For years, Zach Ault, a father of three, enjoyed being physically active. He was even training for a half-marathon. He would go on long runs in hopes of competing in the race.

But in 2017, he took time off to recover from an infection. After recovering, he tried to continue his runs but could not complete them.

An invisible disease began causing Ault problems. He was not able to spend time with his children. He had to cut back his job. Even sleeping as much as 16 hours a day made no difference in his condition.

"His body had literally hijacked him and it wasn't going to allow him to push through," said Anne Ault, his wife.

After months of testing, doctors announced their diagnosis of Ault's condition.

Chronic fatigue is a difficult issue

Patients may have difficulty standing upright. They also may have trouble thinking, often described as a "brain fog."

Many cases go undiagnosed or misdiagnosed. There are no approved treatments, or even tests to help with diagnosis. There is no way to predict who will recover and who will have a severe case that lasts for years.

Doctors at the National Institutes of Health are looking for more clues. They are interested in people who came down with the disorder after an infection, of any kind, within five years.

About 500 patients have asked about taking part in the NIH study. It starts with a hospitalization for blood and genetic tests, brain imaging scans, as well as other things. Researchers will examine the results before deciding who to invite back for a longer visit.

Zach Ault is one of the subjects in the study. Reporters from The Associated Press filmed Ault beginning a test on an exercise bicycle. "Go as far as you can, work as hard as you can," NIH physical therapist Bart Drinkard told Ault.

While Ault pedals the bike, scientists measure how his leg muscles use oxygen. Afterward, doctors fit a special cap on Ault's head to measure electrical activity in his brain. They then send him to spend the night in an air-tight chamber. Pipes remove air from the room for additional study. Scientists measure oxygen and carbon dioxide levels to tell how much energy Ault is using, minute by minute.

"We can calculate every molecule. It's the cleanest air we have in the hospital," said Kong Chen, a metabolism specialist at NIH. "We're figuring out how his body adjusts to an exercise load, or a stress load."

The study does not offer any treatments to people with chronic fatigue syndrome. But Ault says it did help him learn about the disease. And it gave him ideas about how to save up his energy.

"It's hard not knowing if I'm going to recover, if or when," he said.

Until research has an answer, he says he will "hope for the best but live for right now."

Mike Stobbe reported on this story for the Associated Press. John Russell adapted it for VOA Learning English. George Grow was the editor.

unique – n. used to say that something or someone is unlike anything or anyone else

diagnosis – n. the act of identifying a disease, illness, or problem by examining someone or something

bicycle – n. a vehicle with two wheels that is powered by two pedals

pedal – n. an instrument pressed by the foot when riding a bicycle or playing a musical instrument

metabolism – n. biology: the chemical processes by which a plant or an animal uses food or water to grow, heal amd make energy