What Is Happening at FTX Cryptocurrency Exchange

Update Required To play the media you will need to either update your browser to a recent version or update your Flash plugin.
By Dan Novak
15 November 2022


FTX was one of the world's largest exchanges for digital money called cryptocurrency. FTX's problems worsened over the weekend and threatened the entire industry.

Sam Bankman-Fried founded FTX in 2019. He grew the trading firm quickly by attracting the biggest investors in Silicon Valley.

Last week, FTX declared bankruptcy. Bankman-Fried resigned. The firm said some money had disappeared. And experts say hundreds of millions of dollars may have been lost. 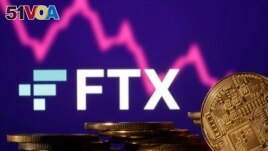 FILE - Representations of cryptocurrencies are seen in front of displayed FTX logo and decreasing stock graph in this illustration taken Nov.10, 2022

The collapse of FTX is a shock to the cryptocurrency industry, which has seen a fair number of problems this year.

Why did FTX go bankrupt?

Investors fled FTX last week over fears about whether the firm had enough money. And FTX agreed to sell itself to another crypto exchange Binance. But the deal collapsed while Binance was researching FTX's finances.

Last Friday, FTX and several connected companies filed for bankruptcy. The firm had valued itself between $10 billion to $50 billion. It listed more than 130 partner companies around the world, its bankruptcy filing said.

And Bankman-Fried who had rescued several cryptocurrency companies also resigned as chief executive of FTX.

On Saturday, FTX said there had been "unauthorized access" to its accounts, just hours after the bankruptcy filing. A debate started on social media about whether the exchange was hacked or a company member had stolen money.

Exactly how much money involved is unclear. But analytics company Elliptic estimated Saturday that $477 million was missing from the exchange. FTX's new chief John Ray III said it was stopping any trade or withdrawal and taking steps to secure investors' money.

Is my bitcoin safe?

Cory Klippsten is the head of financial services company Swan Bitcoin. He said people who own bitcoin should be fine if they keep them off exchanges like FTX. He said they work like a crypto "gambling website."

"Any exchange is a security risk," said Klippsten. Some operate better than others, but he said a better choice is to take control of your digital assets. With bitcoin, it is possible to take coins off the exchange, he said.

Is FTX under investigation?

On Sunday, the Royal Bahamas Police Force said it is investigating FTX, adding to the company's problems. The company had moved its headquarters to the Caribbean country last year.

Even before the bankruptcy filing and missing money, the U.S. Department of Justice and the Securities and Exchange Commission began examining FTX. The agencies were looking into whether any criminal activity or financial crimes were committed, a person familiar with issue told The Associated Press.

What will happen next?

The outcome of FTX's bankruptcy is uncertain. But its failure will likely result in the destruction of billions of dollars of wealth and create even more doubts about cryptocurrencies.

Sequoia Capital has invested in several successful companies that became Apple, Cisco, Google, Airbnb and YouTube. It described its meeting with Bankman-Fried as "talking to the world's first trillionaire" and decided to invest in FTX.

After FTX filed bankruptcy, Sequoia has since written down its $213 million in investments to zero. And a pension fund in Ontario, Canada also wrote down its investment to zero.

Bankman-Fried had been the subject of some criticism before FTX collapsed. He largely operated FTX out of U.S. oversight from his headquarters in The Bahamas. But Bankman-Fried spoke about the need for more regulation of the cryptocurrency industry.

Many supporters of crypto oppose government oversight. Now, FTX's collapse may have helped make the case for closer regulation.

exchange — n. an occurrence in which people give things of similar value to each other

hack — n. to secretly get access to the files on a computer or network in order to get information, cause damage, etc.

gamble — v. to play a game in which you can win or lose money or possessions

pension — n. an amount of money that a company or the government pays to a person who is old or sick and no longer works