What Is ‘Havana Syndrome?’

Update Required To play the media you will need to either update your browser to a recent version or update your Flash plugin.
By Hai Do
25 August 2021


American Vice President Kamala Harris' visit to Vietnam was delayed for a few hours on Tuesday. Officials said two possible cases of "Havana Syndrome" among American workers in the country led to the delay.

White House Press Secretary Jen Psaki said Tuesday that the cases had not been confirmed and did not involve anyone traveling with Harris.

Havana Syndrome is the name for a series of mysterious health incidents first reported by American diplomats and other government employees in the Cuban capital in late 2016.

Sufferers reported hearing loud noise, loss of balance, intense head pressure, and vision problems. Many continued to experience these or other health problems for some time.

Similar unexplained incidents have since been reported by U.S. officials and family members in other countries, including Germany, Austria, Russia and China. Especially worrying are the discoveries of at least two possible incidents around Washington, D.C. One happened near the White House last November. 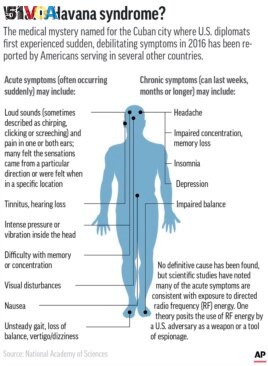 What causes the syndrome?

Following the reports from Havana, U.S. officials told the Associated Press and other news organizations that the diplomats had been exposed to a sound device that operated outside the range of normal hearing.

It was not immediately clear if the device was a weapon or had some other purpose. Officials added investigators were looking into the possibilities that the incidents were carried out by a third country such as Russia. Russia denied any involvement.

The University of Pennsylvania's Center for Brain Injury and Repair did a study in 2018 to compare the brain images of 40 Americans stationed in Havana with other healthy individuals. The study found evidence that American diplomats experienced some form of brain injury in Havana.

A study published last December in the National Academy of Sciences identifies "directed, pulsed radio frequency energy" to be the most probable cause of Havana Syndrome.

James Giordano is a professor at Georgetown University. He has worked with the State Department on investigating the Havana cases. Giordano told the AP last May that there is evidence of brain injuries in several people, suggesting they may have been affected by radio waves. He identified two possible sources. One is a device used to directly target people. Another is a tool that used energy waves for intelligence gathering.

Some scientists, however, disagreed with the findings.

Robert Baloh is a medical doctor from the University of California, Los Angeles. He and Robert Bartholomew of Botany College in New Zealand wrote in the Journal of the Royal Society of Medicine, "the most likely explanation for the recent outbreak of mysterious symptoms in Cuba and elsewhere is mass psychogenic illness." A mass psychogenic illness is when people learn of sickness among others in their group and begin to feel sick themselves.

In June, lawmakers passed the HAVANA act to provide support to Americans who might have brain injuries "from likely directed energy attacks." Senator Susan Collins of Maine said those "who have undergone these attacks while serving our country should be treated the same way we would treat a soldier who suffered a traumatic injury on the battlefield."

William Burns is the director of the Central Intelligence Agency, or CIA. He told NPR in July that Havana Syndrome is "real and it's serious." Burns added, "I am absolutely determined — and I've spent a great deal of time and energy on this in the four months that I've been CIA director — to get to the bottom of the question of what and who caused this."

Hai Do wrote this story for VOA Learning English with additional reporting from the Associated Press. Caty Weaver was the editor.

vision - n. the ability to see

exposed - adj. not protected or covered

frequency - n. the number of times that something like a sound wave or radio wave is repeated

symptom - n. a change in the body or mind which indicates that a disease is present

traumatic - adj. causing someone to become very upset in a way that can lead to mental and emotional problems

determined - adj. having a strong feeling that you are going to do something