What Is Lab-Grown Shrimp?

Update Required To play the media you will need to either update your browser to a recent version or update your Flash plugin.
By John Russell
05 February 2020


The company Shiok Meats in Singapore aims to bring laboratory-grown shrimp to the food industry.

Concerns about health, animals and the environment are leading more people to remove meat from their diet. Plant-based meat alternatives, popularized by Beyond Meat Inc. and Impossible Foods, increasingly appear in supermarkets and restaurants.

But what some people call clean meat - meat grown from cells in a laboratory - is still an idea that is just beginning. 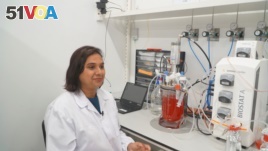 More than 24 companies are testing lab-grown fish, beef and chicken. These businesses hope to enter the alternative meat market, which could be worth $140 billion by 2029. That estimate comes from Barclay's, a financial services company.

Shiok Meats grows its product by taking shrimp cells and keeping them at a temperature of 28 degrees Celsius. They are then given nutrients in a solution. The cells become meat in four to six weeks.

At that cost, a single pork and shrimp dumpling could be as much as $300.

Sriram, a vegetarian, hopes to cut the cost to $50 for one kilogram by the end of this year. She also hopes to sign a new low-cost deal for nutrients that help grow the shrimp cells.

"We are looking at next year, so we might be the first ever company to launch a cell-based meat product in the world," Sriram said. Shiok Meats still needs approval from the city-state's food regulator.

In Singapore, some people said they would try lab-grown meat.

"I am willing to try," said 60-year-old Pet Loh, while she shopped for shrimp in a Singapore market. "I may not exactly dare to eat it frequently, but I don't mind buying and trying it because the animals in the oceans are declining."

Any alternative ways of making animal protein without harming the environment are positive, said Paul Teng, a specialist in agritechnology at Nanyang Technological University. But, he added, more studies are needed to understand any negative results of making cellular protein.

Aradhana Aravindan and Travis Teo reported on this story for Reuters. John Russell adapted it for Learning English. Mario Ritter, Jr. was the editor.

alternative – n. something that can be chosen instead of something else : a choice or option

solution – n. a liquid in which something has been dissolved

regulator – n. an official who works for the part of the government that controls a public activity (such as banking or insurance) by making and enforcing rules