What's Next for ISIL and Iraq?

Update Required To play the media you will need to either update your browser to a recent version or update your Flash plugin.
By VOA
04 July, 2014

Sunni Muslim militants have been putting pressure on the Iraqi capital, Baghdad. Officials in both Baghdad and Washington are concerned about the militant group ISIL -- the Islamic State of Iraq and Levant. The recent successes of the group also are of concern to al-Qaida, its one-time ally.

Western officials once thought of al-Qaida as the world's leading terror organization. Last winter, al-Qaida leaders disowned ISIL and its leader, Abu Bakr al-Baghdadi, for refusing to obey orders. They criticized his goal of creating a borderless caliphate, or Islamic state, across parts of Iraq, Syria, Jordan and Lebanon.

On Sunday, in an audio recording, ISIL declared itself an "Islamic State" without the words "Iraq and the Levant." The group named its chief as "the caliph," or head of state, and "leader for Muslims everywhere." After the announcement, Abu Bakr al-Baghdadi asked all Muslims to move in and join the fighting in Iraq and Syria. 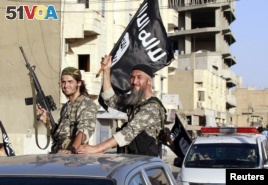 Militant Islamist fighters parade along the streets of Syria's northern Raqqa province, June 30, 2014. The parade was to celebrate the declaration of a "caliphate" by ISIL.

The declaration of the caliphate is likely to intensify the dispute between ISIL and al-Qaida. Aaron Zelin is a Middle East expert. He wrote that, "The two groups are now in an open war for supremacy of the global jihadist movement." In his words, "ISIL holds an advantage, but the battle is not over yet." The Washington Institute for Near East Policy reported his comments.

With its recent success in Iraq, ISIL has increased its standing among jihadi or Islamist groups worldwide.

Ansar Bait al-Maqdis is a jihadist group based in the Sinai Peninsula. It has been supportive of Abu Bakr al-Baghdadi. The group claimed responsibility for a suicide bombing in Egypt earlier this year. The attack killed three South Koreans and injured more than 10 other people.

In North Africa, Ansar al-Sharia groups have published pro-ISIL messages on the Internet. Jihadists in the Gaza Strip have also expressed support for the ISIL leader.

Charles Lister is a visiting fellow with the Brookings Doha Center. He says the declaration of a caliphate by ISIL "poses a huge threat to al-Qaida and its long-time position of leadership of the international jihadist cause."

In his words, "taken globally, the younger generation of the jihadist community is becoming more and more supportive of ISIL. We will very likely find ourselves in a dualistic position of having two competing international jihadist representatives -- al-Qaida, with a now more locally-focused and gradual approach to success; and the Islamic State, with a hunger for rapid results and total hostility for competition."

The pressure on Iraq's central government is more immediate. The government of Prime Minister Nouri al-Maliki has asked the United States for airstrikes against the ISIL without success. The Iraqis are now turning to Russia for help.

Lukman Faily is the Iraqi ambassador to the U.S.

He says "We have a need. There is a void. If the U.S. can't fill that void, whomever is available -- including Russia -- then they are welcome to fill that void."

President Barack Obama is not taking any chances. On Monday, he announced he is sending more troops to Iraq to protect the U.S. embassy and the Baghdad airport. The troop deployment brought to nearly 800 the number of U.S. forces in Iraq.

And that's In the News from VOA Learning English.

This report was based on stories from reporters Jamie Dettmer and Jeff Seldin, and VOA's News Division. For the latest information on this story, go to 51voa.com