Update Required To play the media you will need to either update your browser to a recent version or update your Flash plugin.
By John Russell
12 December 2022


Animal and plant species are disappearing at frightening levels. The problem has led to efforts to "rewild" places where such life existed before human development, pollution and climate change forced it out.

The American city of Detroit, Michigan is an example of how human actions can increase rewilding, whether on purpose or not. 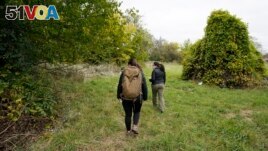 Yale University doctoral students Siria Gamez, right, and Aishwarya Bhandari walk through a field looking for their wildlife camera that had been attached to a tree in a Detroit park on Oct. 7, 2022. (AP Photo/Carlos Osorio)

Up to 1 million animal species are at risk of dying off, says a 2019 United Nations report.

The U.S. Forest Service estimates 2,428 hectares of open space are lost daily as cities and suburbs grow. More than two-thirds of the world's people will live in urban areas by 2050, the U.N. says.

This expectation has led some large cities – such as Detroit – to begin rewilding. Rewilding generally means helping natural systems in damaged locations. That might mean removing dams or building tunnels to reconnect animal pathways cut by roads. Workers also sometimes reenter animals to an area. Predators, such as wolves, can help reestablish balance to an environment, for example.

Detroit's population reached a high of 1.8 million in the 1950s. Then the population began dropping. By 2000, there were fewer than one million people living in the city. Thousands of houses and other buildings were left empty over the years. Some structures were destroyed, leaving empty areas that plants and animals regained as habitats. Nonprofit groups have planted trees, community gardens and pollinator-friendly plants in these areas also.

Special projects brought back birds of prey such as ospreys and peregrine falcons.

Bald eagles found their way back as bans on DDT and some other insect poisons were put in place nationwide. Anti-pollution laws and government-supported cleanups made nearby rivers better for fish, beavers and native plants, such as wild celery.

John Hartig of University of Windsor was the former head of the Detroit River International Wildlife Refuge. He described Detroit as a great example of urban rewilding. He says the process has been organic as opposed to planned. "We created the conditions, things got better environmentally, and the native species came back," he said.

The refuge, a half-hour's drive from downtown, is made up of 30 areas of land totaling 2,509 hectares. It includes islands, wetlands and former industrial sites. It is home to 300 bird species and is a busy visiting place for ducks, raptors and others during migration, said Manager Dan Kennedy.

Unlike most big cities, its population is decreasing but its streets, buildings and other infrastructure remain in place.

And there are many kinds of habitats, including large lakes, rivers and human neighborhoods - some occupied, others mostly unoccupied. Harris also noted Detroit's parklands, which she described as so quiet "you don't even know you're in the city."

"It used to be that you had to go to some remote location to get exposure to nature," said Harris. "Now that's not the case. Like it or not, rewilding will occur. The question is, how can we prepare communities and environments and societies to anticipate the presence of more and more wildlife?"

Detroit is not the only city involved in rewilding.

The German cities of Hannover, Frankfurt and Dessau-Rosslau set aside areas, including parkland and waterways, where nature could take its course. As native wildflowers have appeared, so too have birds, butterflies, bees, and hedgehogs.

Britain's capital, London, is carrying out a huge effort to rewild the city. Mayor Sadiq Khan announced the plan last year. It includes support for 45 projects to improve the environment for stag beetles, water voles and birds such as swifts and sparrows.

Nathalie Pettorelli of the Zoological Society of London said, "Climate change is coming, and we are facing an equally important biodiversity crisis...There's no better place to engage people on these matters than in cities."

She added, "A lot of city people have lost their tolerance to live with wildlife....There's a lot more reteaching ourselves to be done. To really make a difference in tackling the biodiversity crisis, you're going to have to have people on board."

John Flesher reported on this story for the Associated Press. John Russell adapted it for VOA Learning English.

pollinator—n. creatures (such as bees) that give (a plant) pollen from another plant of the same kind so that seeds will be produced

anticipate -- v. to think of (something that will or might happen in the future)

biodiversity—n. the existence of many different kinds of plants and animals in an environment

tolerance – n. the ability to accept, experience, or survive something