What Is the World’s Largest Plant?

Update Required To play the media you will need to either update your browser to a recent version or update your Flash plugin.
By John Russell
05 June 2022


Scientists have discovered the world's largest plant — a seagrass meadow that has grown by repeatedly copying, or cloning, itself.

A genetic study found that the underwater field of green seagrass that lives off Australia's western coast is a single organism. The organism, 180 square kilometers in size, has survived by making copies of itself for over 4,500 years.

The research was published in Proceedings of the Royal Society B. 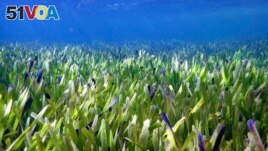 The University of Western Australia's Jane Edgeloe helped write the study. She wrote that the researchers confirmed that the meadow was a single organism. They did this by sampling and comparing the DNA of small pieces of seagrass from across the sea.

Several plants and animals can reproduce without sex. Researchers wrote that the process can create very fast growth. But clones of a single organism can be at increased risk of disease.

The scientists call the meadow of Poseidon's ribbon weed "the most widespread known clone on Earth."

Widespread is a term that means common over a wide area.

Although the seagrass meadow is very large, it faces risks. Ten years ago, the seagrass covered an area of around 18 square kilometers more than it does today. But storms and rising ocean temperatures linked to climate change have recently killed almost one tenth of the ancient seagrass bed.

seagrass – n. a grass-like plant that lives in the sea

meadow – n. a flat area that is covered with tall grass

sample – v. to take a small amount of something and study it so that it gives you information about the thing it was taken from