What Is the 'Zero Article'?

Update Required To play the media you will need to either update your browser to a recent version or update your Flash plugin.
By Alice Bryant
21 February, 2019


Wow, I sure do love cats! I suppose I didn't know how much until my social media service informed me I had "liked" eight pictures of cats this week. Maybe I should get a cat – or stay off of social media. &#128522;?

If you listened closely, you may have noticed that I did not use an article in my first two sentences about cats, but I did in my third. There, I used the article"¡a"¡

On our program today, I will tell you why and share some simple rules for when not to use articles.

As you may know, English articles refer to the words"¡"¡"¡a"¡ and"¡the"¡ Even some English learners with years of training have trouble with these little words–¨ and for good reason! The rules differ from language to language, making it tricky to know when to use them.

But, do'¡t worry! The good news is that some kinds of nouns do not require articles in speech or writing. This idea is often called the"¡zero article"¡ The term"¡zero articl"¡ itself is not very important. It is just a way of saying no article is used.

There are many kinds of nouns that are not preceded by articles in English. Other nouns get no article only in some kinds of statements, such as generalizations.

Plural and noncount nouns
in generalizations

To begin, we do not use articles before plural nouns and noncount nouns when making generalizations.

A generalization is a broad statement or an idea that can be applied to a whole group of people or things.

As you may know, a plural noun is the form of a word that relates to more than one person or thing, like apples, dogs, telephones and children.

Le'¡s listen to an example of a generalization with plural nouns:

Dogs are much more playful than cats.

This is a very broad statement applied to two groups of animals, so we do not use articles.

We do however use articles with plural nouns in specific statements. Here is an example for comparison:

The dogs at the doggy park are very playful.

The speaker is talking of specific dogs–¨ the ones at the doggy park. So the article"¡th"¡ is used before the plural noun"¡dogs"¡

You may remember from an earlier program that a noncount noun is a noun that we usually do not count. So it does not appear in plural form. Noncount nouns include materials (like gold), substances (like water and fire), abstract things (like music and justice) and some other things.

Generalizations with noncount nouns are not preceded by articles. Le'¡s hear an example:

The person is not speaking of specific music. They are saying they enjoy the general act of listening to music as they exercise.

For comparison, her'¡s a specific statement:

The music at the show last night was too loud.

The person is speaking of specific music–¨ the music at the show last night. So the article"¡th"¡ appears before the noncount noun"¡music"¡ 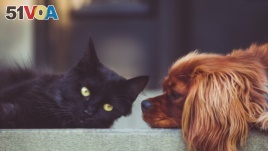 Some people believe dogs are more playful than cats -- an example of a generalization with plural nouns.

The zero article also applies to other kinds of nouns. For instance, we normally do not put an article in front of a proper noun–¨ a word or group of words that name a specific person, place or thing. Proper nouns are easy to identify because they begin with capital letters, like the month of August, 7th Street, Mexico City, Alice, English and Voice of America. Have a listen:

Note that none of the proper nouns has an article before it.

Articles however must remain in place if they are part of the full name of something, like the newspaper The New York Times, musical group A Tribe Called Quest and country The Netherlands. Her'¡s an example:

My favorite musical group in high school was A Tribe Called Quest.

Now, on to transport phrases.

The group traveled from Tangier to Casablanca by train.

In addition, we do not use articles with some time words and phrases, such as"¡at night"¡"¡at midnight"¡"¡tomorrow"¡"¡toda"¡ and"¡yesterday"¡ Articles also are not used for general time phrases beginning with the word"¡last"¡ such as"¡last night"¡"¡last week"¡ and"¡last year"¡ as in this example:

Last week, I took a painting class for the first time.

However, in American English, there are a few exceptions, such as"¡at the hospital"¡

And, lastly, we do not use articles in relation to the general role of most common places, as with the word"¡clas"¡ in this sentence:

When does class begin in DC public schools?

And now, back to my cat obsession. '¡ll tell you later if I decide to get a cat or just stop"¡likin"¡ so many pictures online.

Alice Bryant wrote this story for Everyday Grammar. George Grow was the editor.

Now, you try it! Practice using the zero article (no article). Choose any three or more sentences to write.

3. Write a statement or question using one to three proper nouns.

article–¨ n. a word that is used with a noun to show whether or not the noun refers to a specific person or thing

refer to–¨ v. to have a direct connection or relationship to something

abstract–¨ adj. relating to general ideas or qualities rather than specific people, objects, or actions

phrase–¨ n. a group of two or more words that express a single idea but do not usually form a complete sentence

obsession–¨ n. a state in which someone thinks about someone or something constantly or frequently