What Is That Thing Called?

Update Required To play the media you will need to either update your browser to a recent version or update your Flash plugin.
By VOA
11 July, 2015

It has happened to all of us. You want to talk about an object, but you forgot the name of it. Or you never knew the name at all. Maybe you are not even sure there is a word for it.

For example, that thing that you need to fix your bicycle. Or perhaps it is something you need for your computer. Or that part on your motorcycle that never, ever seems to work. 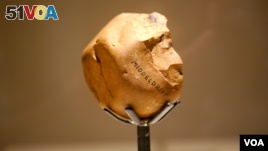 What is this? If you don't the name of something, just point to it and call it a doohickey, thingamajig, or whatchamacallit. This happens to be a two million year old chopping tool.

What are these things?

They are called "doohickies." A doohickey is a word you use when you do not know, or you have forgotten, the real name of an object.

The MacMillan Dictionary defines doohickey as "something such as a small object or tool that you cannot remember the name of." The American Heritage Dictionary says it is "something, especially a small device or part, whose name is unknown or forgotten."

Language experts say the word first started being used in the United States in the early 1900s. But other experts say they have seen examples of words like these in writings from the middle 1800s.

The Merriam-Webster Dictionary for Learners of American English gives this example of how native speakers might use doohickey: "I need one of those doohickeys, you know, with the long handle."

Merriam-Webster adds that doohickey may be a combination of two other words: "doodad" and "hickey." Strange as it may be, both of these words mean the same as doohickey. The dictionary lists a lot of strange words as synonyms for doohickey. The most common are whatchamacallit, whatnot and whatsit.

You will probably never see these words in official documents or newspaper reports. But you might hear them in informal American English, when people are talking to each other.

"Hey, what does this doohickey do, anyway?"

"Dude, bring me that thingamajig, willya?

"Janine, can you get me one of those whatchamacallits?"

Most Americans will know what you are talking about if you use one of those words. Just point at the object, use one of these words, and they will bring it to you.

Doohickey and words like it have their own page on the Wikipedia website. Wikipedia calls them "placeholders." It says words like these are usually nouns and "can be used for people, objects and places."

Unofficial studies show Americans are using words like doohickey less than they once did. The decline seems to have started a few years ago. Still, a recent search of Google News showed the word was used in more than 1,000 news articles in just a couple months.

You can see a video of them using the word on YouTube.

I'm Anna Matteo. This Words and Their Stories was written by Christopher Jones Cruise.

motorcycle – n. a vehicle with two wheels that is powered by a motor and that can carry one or two people

synonym(s) – n. a word that has the same meaning as another word in the same language

handle – n. a part of something that is designed to be held by your hand

informal – adj. not formal, such as having a friendly and relaxed quality

cable – n. a strong rope made of wires that are twisted together

Does your language have words for things for which you don't know the name? We'd like to know what they are. Tell us about them in the comments section.

The song ending this show is "Doo Hickey" by Ben Colder.