What Is Your 'Bread and Butter'?

Update Required To play the media you will need to either update your browser to a recent version or update your Flash plugin.
By Anna Matteo
13 April, 2019


Now the VOA Learning English program Words and Their Stories.

Today we talk about a food expression using something most cultures have – bread. It could be naan bread of India, a pita from the Middle East or steamed bread from China. The French have the baguette and Italians have ciabatta. Scandinavian countries often eat heavy, dark breads. And people throughout South America may eat deep fried breads.

Some people like to dip their bread into olive oil. Some like to spread chocolate on top. But one of the best things to put on bread -- especially if it is warm from the oven -- is butter!

Bread and butter is a classic combination.

But "bread and butter" also means something almost as comforting: a way to make money!

Some word experts say the phrase "bread and butter" began in Europe and England during the Middle Ages. At that time, many peasants could only afford bread and butter as their entire meal. Or they would eat it with soup. 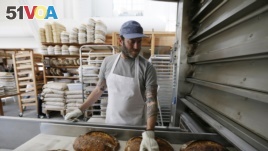 Nothing beats warm bread and butter! In this photo, baker Chad Robertson checks loaves of bread coming out of an oven at the Tartine Manufactory in San Francisco, California, 2017. (AP Photo/Eric Risberg)

Then around the 1600s, the meaning changed. People began using it to mean the way they earned a living, or their livelihood.

So, that is the origin. Here is how you can use it.

Let's say you really like to write and perform songs. But you do not make enough money doing those things to pay for your housing, groceries and other expenses. So you get a job as a website designer. If someone asks what you do, you could say, "Well, I'm a musician. But designing websites is my bread-and-butter."

In other words, designing websites pays your bills. Making music ... does not. So, you count on web design for your "bread and butter."

"To know which side your bread is buttered on" means you are aware of the people who can help you. But this expression has a bad feel to it. It means being unusually aware of how others can help you.

Now, let's hear two friends use some of these expressions in a short conversation.

A: Hey, do you want to go to the football game this afternoon?

B: I can't. I have to help my girlfriend's dad paint his garage. He may be able to help me get a job at his software company.

A: I see. Well, it's always good to know which side your bread is buttered on.

B: Do you have to make it sound that way?

A: Which way is that?

A: I'm just saying you're being smart. If he can help you, it's a good idea to help him.

B: Look. Designing software is my bread-and-butter. And don't forget – I'm the breadwinner for my mom and two brothers. So, I'm lucky to know someone who is so connected in the business.

A: Well, just make sure you stay on his daughter's good side too. If you guys break up, you might find yourself on the breadline.

B: Urgh. Let's change the subject!

And that's all the time we have for Words and Their Stories. I hope you have enjoyed learning about these bread expressions. The story editor, Kelly Jean Kelly, liked it. She said it was the best thing since sliced bread! When bakers started slicing bread it made it easier to eat. So, when something is very good we can say it is the best thing since sliced bread. This was a very nice thing for Kelly to say even if it was a great exaggeration!

Until next time, I'm Anna Matteo!

Anna Matteo wrote this story for VOA Learning English. Kelly Jean Kelly was the editor. At the end of this program The Newbeats sing their 1964 hit "Bread and Butter."

staple – n. something that is used widely and often : I went shopping for bread, milk, and other staples.

scheme – v. to make plans to do or get something in a secret and often dishonest way

plot – v. to plan secretly to do something usually illegal or harmful

lucky – adj. producing or resulting in good by chance

breadwinner – n. a person who earns money to support a family

exaggeration – n. the act of describing as larger or greater than what is true : a statement that has been enlarged beyond what is true