What It Means to Be a ‘Stick in the Mud’

Update Required To play the media you will need to either update your browser to a recent version or update your Flash plugin.
By Anna Matteo
01 May 2021

In many places in the world, spring brings a lot of rain. And this can lead to a lot of mud. So today, let's talk about a mud expression! 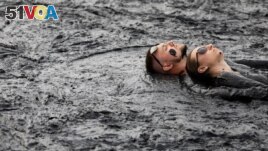 People take a mud bath during the "Iron mud" festival in the town of Zheleznovodsk, in Stavropol region, Russia, August 24, 2019. (REUTERS/Eduard Korniyenko)

A stick in the mud is a boring or uninteresting person. They do not try anything new. They are not willing to take a risk. They also could be slow and old-fashioned.

Sometimes sticks in the mud have unpopular or outdated beliefs. They are not progressive. Or it could be a combination of all or some of these things.

So, a person could be called a stick in the mud for many reasons. But we always use this expression to show disapproval. So, it's an insult.

Let's say you are at a party with friends. Now, usually in your friend group, you are the life of the party. This means you are the one at the party who is having the most fun. You also create fun for others. You join whatever game or activity is happening.

But at this party, maybe you don't feel well. Or maybe you just received some bad news. Perhaps you need to be up early the next day for an important test. Whatever the reason, you are sitting in the back of the room and are not really talking much to anyone. So, you are not acting like your usual self. And you haven't told anyone why. So, you should not be surprised when your best friend asks you, "Why are you being such a stick-in-the-mud?"

Maybe next time you should tell your best friend when something is bothering you or when you are not well.

We have other names for a stick-in-the-mud person.

You can also use stick-in-the-mud as an adjective before a noun. For example, a friend of mine always does as she is told, never tries anything new or takes any risks. She has a bit of a stick-in-the-mud personality.

Some word experts say this expression comes from an image of feet or the wheel of a horse carriage stuck in mud. Both are unable to go anywhere. They cannot progress. So, in early days the term stick in the mud, usually described someone who remained in a difficult situation, either by choice or because they were stuck.

Anna Matteo wrote this for VOA Learning English. Mario Ritter was the editor.

old-fashioned – adj. from or like that of an earlier time

outdated – adj. no longer useful or acceptable : not modern or current

fuddy-duddy – n. one that is old-fashioned, unimaginative, or conservative

personality – n. the qualities (as moods or habits) that make one human being different from others

attitude – n. a mental position with regard to a fact or state : the way you think and feel about someone or something

carriage – n. a wheeled vehicle, especially : a horse-drawn vehicle designed for private use and comfort