What Makes Beauty So Appealing?

Update Required To play the media you will need to either update your browser to a recent version or update your Flash plugin.
By Jessica Berman
25 October, 2015


Every year the entertainment magazine People publishes a list of who it considers the most beautiful people in the world.

How do the editors choose from the 7 billion people on Earth? What makes a person beautiful or ugly?

In the case of People, there is one major factor that comes above all others. What selections will generate the most interest among readers? More readers mean more money for the magazine.

This year the magazine named Sandra Bullock the most beautiful person in the world. Many people would agree that she is good looking. However, those same people are likely to differ about how good looking Bullock is.

But why do some people find Sandra Bullock gorgeous and others think she is just attractive?

A new study suggests that what a person finds good-looking in another person is shaped by the observer's environment and experiences.

Beauty, say experts, is very individual. While Bullock is undeniably good-looking, not everyone agrees to what extent.

Laura Germine is a researcher in psychiatric genetics at Massachusetts General Hospital and Harvard Medical School. She co-led the study, published in the journal Current Biology. Over 35,000 people took part by rating the faces of people in photographs posted on the website TestMyBrain.org. 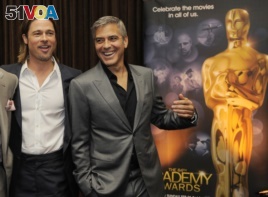 Ms. Germine said the research centered on the individual judgments of face attractiveness that differ from each other.

"So I think most people agree, for example, that Brad Pitt is better looking than, say, [American presidential candidate] Donald Trump. But when it comes to Brad Pitt versus [actor] George Clooney versus [actor] Ryan Gosling, then reasonable people might disagree."

The scientists got a good idea of the uniqueness of individual face preferences from examining the choices made by the online group.

Then the researchers turned to twins. They included 550 sets of identical twins and 214 pairs of same sex, non-identical twins. The two groups of twins rated faces for attractiveness.

In fact, the preference for beautiful — or dislike of average — faces agreed only about 50 percent of the time. The findings suggest that environmental experiences have as much influence on people's idea of beauty as genetics.

"So it could be that if a person has a relationship, a romantic or friend relationship, with someone they are very close to and they think of very positively, the characteristics of that person's face will then seem more attractive to them even on other people."

In other words, beauty appears very much to be in the eye of the beholder.

What do you find beautiful in a face? Let us know in the Comment section or on 51VOA.COM.

Jessica Berman wrote this story for VOA News. Caty Weaver adapted it for Learning English. Kathleen Struck was the editor.

attractive - adj. having a pleasing appearance

unique - adj. used to say that something or someone is unlike anything or anyone else

beauty is in the eye of the beholder - expression judgment on what is beautiful is personal, not objective