What Russia’s Suspension of Ukrainian Grain Deal Could Mean

Update Required To play the media you will need to either update your browser to a recent version or update your Flash plugin.
By Bryan Lynn
31 October 2022


Russia announced over the weekend it was suspending its part of a deal permitting Ukraine to ship grain from Black Sea ports.

Russia and Ukraine reached the deal in July after negotiations involving the United Nations and Turkey. Russia agreed to remove a blockade on Black Sea ports for shipments of grain, one of Ukraine's most important export products. 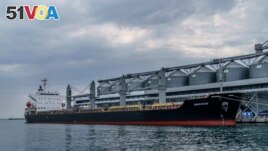 In this file photo, the ship Navi-Star sits full of grain since Russia's invasion of Ukraine began five months ago as it waits to sail from the Odesa Sea Port, in Odesa, Ukraine, July 29, 2022. (AP Photo/David Goldman, File)

So far, the deal has permitted more than 9 million tons of grain in 397 ships to safely leave Ukrainian ports.

But Russia said Saturday it was ending its involvement in the deal. Russia made the announcement after accusing Ukraine of launching a drone attack against Russia's Black Sea Fleet off the coast of Russian occupied Crimea.

Even after Russia's announced suspension, however, Ukraine said on Monday more than 12 ships carrying grain had sailed from Black Sea ports. Ukraine had said earlier that more than 200 fully loaded ships had been blocked from leaving the ports.

The grain exports are important because Russia and Ukraine are major suppliers of wheat and other food products to many parts of the world. This includes Africa, the Middle East and parts of Asia where many people are already struggling with hunger.

Experts say it remains unclear how many shippers would choose to take the risk of sailing with Russia's protection. So what could Russia's decision mean for a world increasingly worried about food security and high food prices?

What has the deal resulted in?

Before the grain deal was completed, the United States and European partners accused Russia of starving vulnerable parts of the world by blocking grain exports.

Since the deal, Russian President Vladimir Putin has said most of the exported grain was going to Europe instead of the world's hungriest nations.

However, the U.N. Conference on Trade and Development said in a report last week that wheat is mostly going to developing countries. The organization said nearly 20 percent of exported wheat has gone to the least developed countries.

Russia has requested a meeting of the U.N. Security Council to discuss the issue. It also offered to supply up to 500,000 tons of grain "to the poorest countries free of charge in the next four months."

Economic restrictions on Russia do not affect its grain exports. And a deal reached after Russia's invasion of Ukraine was meant to clear the way for food and fertilizer shipments. But some businesses and banks have been unwilling to ship because they fear it could violate international rules.

Ukraine, the United States and allies are again accusing Russia of playing "hunger games" with the world.

Joseph Glauber is senior researcher at the International Food Policy Research Institute in Washington. He told the AP that developing nations will have to find new suppliers and pay more from countries such as the U.S., Argentina and Australia, where dry conditions or rain are creating agricultural problems.

"What the world needs are some really big crops," Glauber said. And with Ukraine usually providing about 10 percent of world wheat exports, "that's a big hole to build," he added.

vulnerable – adj. able to be hurt or at risk of being harmed