What We Know about the COVID Variant from India

Update Required To play the media you will need to either update your browser to a recent version or update your Flash plugin.
By Dan Novak
03 May 2021


India has recorded the world's sharpest increase in coronavirus infections in recent weeks. The crisis has put great pressure on the country's health system, causing hospitals in major cities to run out of beds, oxygen and medicines.

Scientists are studying whether a variant of the coronavirus is to blame for the unexpected rise in Indian cases. The variant, named B.1.617, has been reported in at least 17 other nations as well.

Here is what health officials know about this variant so far. 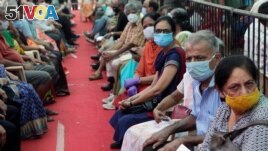 What is the Indian variant?

Shahid Jameel is a virologist in India. He said the variant contains a mutation in the spike protein, the part of the virus that attaches to human cells. The spike protein is targeted by existing vaccines. The mutation may mean that the vaccines offer less protection against the variant.

The World Health Organization (WHO) said the B.1.617 variant was first identified in India last December. An earlier version was seen in October 2020.

The WHO has called the virus version a "variant of interest." That means it may have mutations that make the virus easier to spread, cause more severe disease or escape vaccine immunity. The WHO has called other versions found in the United Kingdom (UK), Brazil and South Africa "variants of concern," suggesting a higher threat level.

Are variants causing the increase in cases?

The WHO says more study is urgently needed to find out whether the variants are driving the increases. Limited research carried out in laboratories has suggested the variant could be more transmissible.

However, health officials say another highly transmissible variant that was first discovered in the UK is behind an increase in cases in some parts in India.

Sujeet Kumar Singh is head of India's National Center for Disease Control. He said that in New Delhi, UK variant cases almost doubled during the second half of March. But he said the Indian variant has been widely seen in Maharashtra, the country's hardest-hit state.

Chris Murray is a disease expert from the University of Washington in the United States. He said the large amount of cases seen in a short period of time in India means there could be what he called an "escape variant."

Such a variant could be overpowering any past immunity from natural infections in some populations, Murray said. "That makes it most likely that it's B.1.617," he added.

But Murray also pointed out that more research is needed, and that the spread is also being driven by the UK and South African variants.

Carlo Federico Perno is with Rome's Bambino Gesù Hospital. He said it is very unlikely that the Indian variant is the only cause of India's sharp increase in cases. He pointed to large social gatherings as another possible cause.

Indian Prime Minister Narendra Modi has been criticized for permitting big political gatherings and religious festivals that turned out to be super-spreader events.

There are some hopeful signs that vaccines may stop the Indian variant. White House chief medical adviser Anthony Fauci said early evidence shows that Covaxin, a vaccine developed in India, is able to effectively fight it.

In the UK, the government's Public Health England said it was working with international partners to study the B.1.617 variant. It said there is currently no evidence that the Indian variant, nor the British or South African variants, cause more severe disease or make the vaccines less effective.

immunity – n. the ability to be protected against catching a disease

transmissible - adj. able to be transmitted, or spread