Update Required To play the media you will need to either update your browser to a recent version or update your Flash plugin.
By VOA
29 March, 2016

Last Friday, Democratic presidential candidate Bernie Sanders held a rally in the state of Oregon. During the event, an unexpected guest joined the Vermont senator on stage: a bird.

The tiny bird flew around Sanders. Then, it landed on the podium where Sanders was speaking. 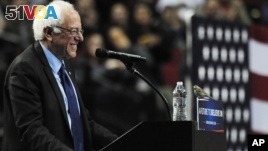 Democratic presidential candidate Bernie Sanders smiles as a bird lands on his podium when he addresses the crowd during a rally at the Moda Center in Portland, Ore., Friday, March 25, 2016. (AP Photo/Steve Dykes)

Sanders and the bird, a house finch, stared at one another for several moments. Smiling, Sanders told the crowd he believed the bird's presence was symbolic.

"I know it doesn't look like it, but that bird is really a dove asking us for world peace."

The crowd went wild. And so did the Internet. The play-on-words hashtag #BirdieSanders soon trended. Five days later, the hashtag is still a trending topic on social media.

People quickly called it, the most "heartwarming moment" of the 2016 presidential election. Indeed, in an election season dominated by insults and negative campaigning, the sweet moment between Sanders and the tiny bird was a welcome change.

Social media users enjoyed artwork and graphics inspired by the event. Some graphics even showed Sanders as a bird himself.

Senator Sanders tweeted a drawing of him and the bird looking at one another, with the word "together."

The Late Show host Stephen Colbert joked about the viral event on his show Monday night.

Then he joked, ""What are the odds that a bird would be attracted to an old man who looks like he has bread in his pockets?"

podium - n. a stand with a slanted surface that holds a book, notes, etc., for someone who is reading, speaking, or teaching

odds - n. the possibility that something will happen

pocket - n. a usually small cloth bag that is sewn into a piece of clothing, and that is open at the top or side so that you can put things into it