Update Required To play the media you will need to either update your browser to a recent version or update your Flash plugin.
By VOA
08 December, 2015

Republican presidential candidate Donald Trump is all over social media today because of comments he made Monday. Trump called for the U.S. to temporarily ban all Muslims from entering the country. He said a ban was necessary to protect the U.S. from more terror attacks. 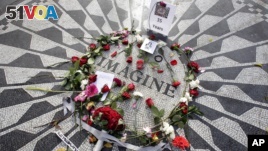 By Tuesday afternoon, "Josh Earnest" was trending on Facebook.

It was unclear whether some Twitter users actually believed that the White House could disqualify a presidential candidate. (To be clear: it cannot.)

The Philadelphia Daily News on Tuesday compared Trump to Adolf Hitler. Its cover photo showed Trump with his right arm extended, in a way similar to the Nazi salute.

The title read: "The New Furor."

Today marked the 35th anniversary of the death of British musician John Lennon. The former Beatles star was shot and killed on December 8, 1980 in New York City.

She wrote, "Over 1,100,000 people killed by guns in the USA since John Lennon was shot and killed on December 8, 1980." She ended her message with the hashtag #StopGunViolence.

Another #JohnLennon-inspired trend on Twitter today was #InternetTheBeatles. People played with the names of famous Beatles songs and modernized them to include Internet-related vocabulary.

temporarily - adv. continuing for a limited amount of time

slam - v. to criticize (someone or something) harshly