Update Required To play the media you will need to either update your browser to a recent version or update your Flash plugin.
By Ashley Thompson
14 March, 2018

Finland is the world's happiest country.

The World Happiness Report, published Wednesday, studied the happiness levels of 156 countries. It considered factors such as life expectancy, social support and corruption in its examination. 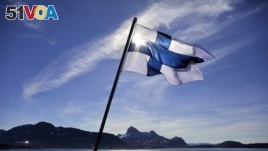 FILE - In this Saturday, July 29, 2017 file photo, Finland's flag flies aboard the Finnish icebreaker MSV Nordica as it arrives into Nuuk, Greenland. Finland has come out on top of an international index that measures nations by how happy they are as plac

For the first time, the report also ranked 117 countries by the happiness and well-being of their foreign-born immigrants. Finland placed first in that group, as well. In fact, the study found that highly ranked countries in overall happiness had similarly happy immigrant populations.

John Helliwell is an editor of the 2018 World Happiness Report. He said the study shows that a population's happiness seems contagious. In other words, it spreads. He called that the "most striking finding" of the report.

Finland is a nation of 5.5 million people. It has about 300,000 foreigners. Its largest immigrant groups come from other European countries. But there are also small communities from Afghanistan, China, Iraq and Somalia.

Meik Wiking is chief of the Happiness Research Institute, based in Denmark's capital, Copenhagen. He said that Nordic countries almost always rank near the top of the happiness report. He said they are, in his word, "doing something right in terms of creating good conditions for good lives."

He said the findings on the happiness of immigrants, "shows the conditions that we live under matter greatly to our quality of life, that happiness is not only a matter of choice."

The United States ranked 11th in the first World Happiness report, released in 2012. It has never been in the top 10.

The report noted several reasons for its falling position. It said the United States is in the middle of "a complex and worsening public health crisis, involving...obesity, opioid addiction and major depressive disorder."

It added that the "sociopolitical system" in the U.S. produces more income inequality -- a major reason for unhappiness -- than other countries with similarly high-income levels.

Ashley Thompson adapted this report based on Associated Press and Reuters articles. Caty Weaver was the editor.

editor - n. a person whose job is to edit something

contagious - adj. capable of being easily spread to others

Nordic - adj. of or relating to Sweden, Norway, Denmark, and sometimes Finland and Iceland, or to the people who live there

obesity - n. the condition of being fat in a way that is unhealthy

opioid - n. a class of drugs that are recommended to reduce pain