Update Required To play the media you will need to either update your browser to a recent version or update your Flash plugin.
By Ashley Thompson
08 March, 2018

China is making plans to create a large protected space for one of its most famous creatures: the giant panda. 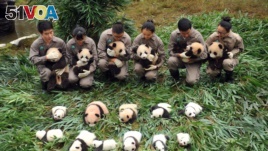 This picture taken on Oct. 13, 2017 shows panda keepers holding cubs to be displayed to the public at the Bifengxia Base of China Conservation and Research Centre of the Giant Panda in Yaan in China's southwestern Sichuan province. (AFP PHOTO)

The Bank of China has promised 10 billion yuan, or $1.5 billion, to set up the protective area. It will be in the southwestern province of Sichuan, China's forest ministry said Thursday.

The Sichuan office of the central bank signed an agreement with the provincial government to pay for the park's construction. The work is to be completed by 2023.

The Associated Press reports that the ministry said the park will measure 2 million hectares. The projects aims to help the local economy while also providing the endangered animals with a huge, unbroken area in which they can meet and mate with other pandas.

Zhang Weichao is a Sichuan official involved in plans for the park. Zhang told the China Daily newspaper that the agreement will reduce poverty among the 170,000 people living within the park's proposed territory.

China's Communist Party Central Committee and the State Council first suggested the idea for the park in January 2017, the newspaper reported.

Giant pandas are China's unofficial national animal. They live mainly in the mountains of Sichuan, with some also living in nearby Gansu and Shaanxi provinces.

An estimated 1,864 giant pandas live in the wild, where they are threatened mostly by loss of natural habitat. Another 300 live in captivity.

construction - n. the act or process of building something (such as a house or road)