Update Required To play the media you will need to either update your browser to a recent version or update your Flash plugin.
By Ashley Thompson
18 January, 2018

Google's Arts and Culture App has been available since 2016.

But this past weekend, the app went viral.

Its popularity rose after the company launched an experimental new "selfie" feature. The feature uses technology to compare a user's face with a famous work of art.

The new feature asks users, "Is your portrait in a museum?"

It selects from paintings of people that hang in more than 1,000 museums around the world. It also introduces users to the history of the painting and of the artist. 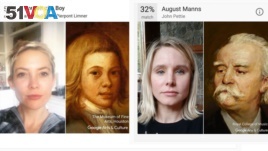 All over social media, people have been sharing their side-by-side results. Some look similar; others really do not. Hollywood actors and other famous people have joined the fun.

While the comparison photos may be everywhere, the face match feature itself is not. For now, it is only available in the United States. And Google has not yet said when it will make the feature available in other countries.

It is not even available everywhere in America. For example, it is not available for users living in the states of Illinois and Texas. Some observers say that is because the laws in those states have restrictions on the use of biometrics. This includes facial scans, the kind of technology the Arts and Culture app uses.

So, residents from those states send their selfie photos to friends living in other parts of the country to see their results.

People outside the United States are looking for ways to use the face match feature, too. Instead of waiting for Google to make it available, some people are downloading the Arts and Culture app from iTunes or Google Play while using a VPN, or virtual private network. If the VPN makes them appear to be in the United States, the face match feature is available to them.

Of course, there is much more to Google's Arts and Culture app than the face match feature. Users can take virtual tours of famous museums, learn about the history of art and even watch ballet and opera performances from around the world.

Ashley Thompson adapted this story from several sources. Hai Do was the editor.

portrait - n. a painting, drawing, or photograph of a person that usually only includes the person's head and shoulders

scan - n. the act or process of using a special machine to see the inside of something (such as a part of the body)

virtual - adj. existing or occurring on computers or on the Internet

biometric - n. the application of statistical analysis to biological data.