Update Required To play the media you will need to either update your browser to a recent version or update your Flash plugin.
By VOA
24 July, 2017


This is What's Trending today...

Millions of people tuned in to watch an epic race on Sunday night: America's top Olympic athlete Michael Phelps versus a great white shark, one of the most predatory animals in the ocean.

The race aimed to see which creature could swim 100 meters faster.

The race was broadcast on a U.S. television series called Shark Week, which is shown on the Discovery Channel. The channel had been promoting the race for weeks. 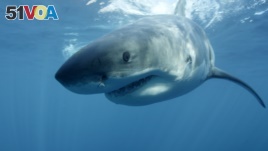 FILE - In this undated file publicity image provided by Discovery Channel, a great white shark swims near Guadalupe Island off the coast of Mexico.

But the program promised to help Phelps. #SharkWeek said: "In order for @MichaelPhelps to beat a shark, he must become a shark."

The Discovery Channel called the race "the battle for ocean supremacy."

The promotions worked. Swimming fans, shark fans, Phelps fans, and viewers who just wanted to see what would happen made a date to watch the event.

A Twitter user, @carrie_liz_26, wrote: "If you think I'm going to spend my Sunday night watching Michael Phelps race a shark then you're right that's exactly what I'm doing."

Another user, @mosleybanks13, posted a picture and wrote: "Watching #PhelpsVsShark, with a dog dressed as a shark, while wearing shark socks. Excitement is real."

Of course, a few potential viewers objected to the race before it even began. They pointed out that great whites are not the fastest sharks.

On Twitter, @BiologistDan wrote: "#Phelps is a coward. Why a Great White? The Shortfin Mako #Shark is 2x as fast at 60mph. What a WIMP!"

But most viewers were happy about the pairing. They expected that Phelps and the great white would be swimming next to each other, like competitors in an Olympic swimming event.

But none of that happened. Instead, viewers watched 57 minutes of the Shark Week episode.

Viewer @Maddie_Jones515 was not happy. She tweeted a picture of Phelps with his angry "game face" before the Brazil Olympics: "Realizing we gotta get through an hour of science for this actual race."

The episode also included Phelps doing shorter, practice races against simulations of two other kinds of sharks. Amazingly, the swimmer won against the reef shark.

But when it was time for Phelps to compete against the great white shark, it did not happen.

First, Phelps swam 100 meters in the ocean alone. He wore a suit that made his body move through the water more easily. And, he wore a fin on his feet to allow him to swim more like a shark. Phelps went pretty fast: 38.1 seconds.

Then, a video showed Phelps racing against a computer-generated image of a shark. The video drew on footage that producers had already taken.

Sharks normally do not swim in a straight line. So the Discovery Channel created some incentive. They put a man on a floating device, dragging a fake seal behind him as bait.

The shark followed the seal, and researchers measured the speed. Then they used the data to create a computer image of a shark swimming. The animal completed the course in 36.1 seconds – exactly two seconds faster than Phelps.

For the "race," the Discovery channel combined the footage of Phelps swimming and animation of the shark swimming. In other words, man and shark did not really swim side-by-side. Instead, Phelps pretended to compete against a digital shark, with an announcer providing sports-like commentary.

In general, social media users did not approve of the technique. They posted short videos of people rolling their eyes, stamping their feet, and turning away in disgust.

@KyleCasmier wrote: "we just wasted a hour waiting to see micheal phelps swim against a computer generated shark, and lose"

epic - adj. very great or large and usually difficult or impressive
predatory - adj. living by killing and eating other animals
simulation - n. something that is made to look, feel, or behave like something else
incentive - n. something that encourages a person to do something or to work harder
bait - n. something (such as a piece of food) that is used to attract fish or animals so they can be caught
digital - adj. using or characterized by computer technology