Update Required To play the media you will need to either update your browser to a recent version or update your Flash plugin.
By Ashley Thompson
24 October, 2017

Many universities this week are marking "Open Access Week." The yearly event centers on improving the online availability of academic research to the public.

Cambridge University in England celebrated by releasing the 1966 doctoral thesis of Stephen Hawking for free online. Hawking was a graduate student at Cambridge from 1962 to 1966.

Hawking is the world's best-known physicist. He completed his thesis, "Properties of Expanding Universes," when he was just 24 years old. The work explores ideas about the origins of the universe -- ideas that Hawking has studied throughout his career. 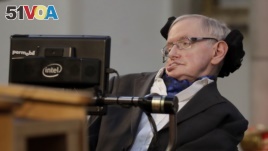 FILE - In this March 6, 2017, photo, Stephen Hawking receives the Honorary Freedom of the City of London. Cambridge University has put Hawking's doctoral thesis online, Oct. 23, 2017. "Properties of Expanding Universes" explores ideas about the origins of

A Cambridge spokesman said in a statement, "We have had a huge response to Professor Hawking's decision to make his PhD thesis publicly available to download, with almost 60,000 downloads in less than 24 hours." The spokesman said that, as a result of the popularity, the website may perform slowly at times.

Hawking's research was already the most-requested item in Cambridge's library. He recently gave the university permission to make it an "Open Access" document.

Hawking said he hoped making his thesis freely available for everyone would "inspire people around the world to look up at the stars and not look down at their feet; to wonder about our place in the universe and to try to make sense of the cosmos."

Many on social media said they were pleased that so many people around the world are interested in reading Hawking's research.

Others wrote that they "loved" that Hawking is the famous person "breaking the internet" this week.

The Associated Press reported this story. Ashley Thompson adapted it for Learning English, with additional materials. Hai Do was the editor.

thesis - n. a long piece of writing on a particular subject that is done to earn a degree at a university

physicist - n. a scientist who studies or is a specialist in physics -- the science that deals with matter and energy and the way they act on each other in heat, light, electricity, and sound

response - n. something that is done as a reaction to something else

origin - n. the point or place where something begins or is created

cosmos - n. the universe, especially when it is understood as an ordered system

item - n. an individual thing: a separate part or thing