Update Required To play the media you will need to either update your browser to a recent version or update your Flash plugin.
By Dan Friedell
08 June, 2016

When you are watching a movie and a character jumps out of a moving car, or runs into a burning building, things may not be as they seem.

Many times the images are edited to make it look like the actor playing the part is doing the dangerous action. But usually, such stunts are done by other professionals. 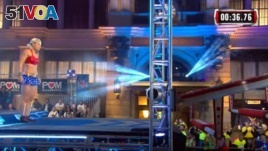 Like stunt woman Jessie Graff. She used to compete in the pole vault in college. She is also an expert at the Korean fighting method called taekwondo.

Graff is tall and strong. She looks like a lot of actors in Hollywood. Her job is to do all the risky moves the actors cannot do.

One of the television shows Graff works on is "Supergirl." When the lead actor needs a break, Graff steps in.

But recently, Graff is getting attention for her work on another television show. It is called "American Ninja Warrior."

It is a sports competition show. And earlier this week, Graff completed the show's difficult obstacle course. At the end, she had to run and climb up a very high and steep wall. She did so wearing the clothes of a comic superhero. Graff was dressed as Wonder Woman.

On Wednesday, Graff was one of the trending topics on Facebook.

People commented that they loved her costume and her strength.

Even actor Lynda Carter, who played Wonder Woman in the 1970s television show, offered her congratulations.

Now Graff moves on to the finals of American Ninja Warrior. She will compete with other qualifiers from several cities around the U.S.

obstacle course – n. a series of objects to go around or over until the finish line

risky – adj. behavior involving the possibility of something bad or unpleasant happening

costume – n. clothes worn to look like a different person or thing

steep – adj. almost straight up and down