A court in Brazil Thursday suspended the messaging service WhatsApp for 48 hours.

WhatsApp reportedly failed to agree to the court's order to give investigators information connected to a criminal case. 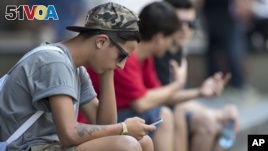 More than 100 million people in Brazil use WhatsApp. Brazilians protested the suspension on social media Thursday. The Brazilian Portuguese hashtag (#Nessas48HorasEuVou) that translates to "In These 48 Hours I Will..." trended worldwide on Twitter. Twitter users joked about what they would do with their time during the next 48 hours instead of using WhatsApp.

Facebook owns WhatsApp. On Thursday, Facebook CEO Mark Zuckerberg posted about the ban in Brazil. He wrote, "We are working hard to get this block reversed. Until then, Facebook Messenger is still active and you can use it to communicate instead. This is a sad day for Brazil. Until today, Brazil has been an ally in creating an open Internet."

The 48-hour ban did not last. Later on Thursday, a judge in Brazil ordered the court to lift the suspension of WhatsApp. Brazilians celebrated on social media. And Facebook CEO Mark Zuckerberg did, too.

He wrote, "WhatsApp is now back online in Brazil! Your voices have been heard and the block has been lifted. Thank you to our community for helping resolve this! #ConnectBrazil."

reverse - v. to cause something to stop or return to an earlier state

resolve - v. : to find an answer or solution to something