Update Required To play the media you will need to either update your browser to a recent version or update your Flash plugin.
By Ashley Thompson
16 September, 2016

If you have ever wanted to use a toilet made of pure gold, now is your chance.

New York's famous Solomon R. Guggenheim Museum has set up a working, 18-carat gold toilet in one of its washrooms. The device, like a piece of art, even has a name. It is called "America."

Museum visitors are invited to use the golden toilet, when the need arises. The toilet is the creation of Italian artist Maurizio Cattelan. He reportedly stated that his artwork is about economic inequality.

The Guggenheim museum said the toilet is a "a bold, irreverent work ... ultimately reminding us of the inescapable physical realities of our shared humanity." It added that the point of the bright, shiny object is to make "available to the public an extravagant luxury product seemingly intended for the 1 percent," or the wealthiest people. 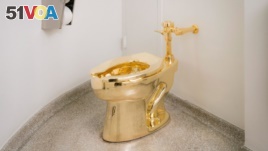 The Guggenheim Museum in New York has installed an 18-carat, solid gold toilet that patrons can use. (Guggenheim)

A reporter for The New York Times was able to try out the golden toilet before it was opened to the public on Friday. The reporter said it "looks best when in use, sparkling so much it's almost too bright to look at."

The newspaper reported that the arrival of the golden toilet was delayed because it was difficult to set up in the Guggenheim. Private donors provided money for the project. The toilet's value has yet to be made public.

This is not the first time a washroom fixture has been used as a work of art.

In 1917, French-American artist Marcel Duchamp called a urinal connected to the wall a "Fountain." The work led to protests in the art community.

irreverent - adj. having or showing a lack of respect for someone or something that is usually treated with respect

extravagant - adj. more than is usual, necessary, or proper; very expensive and not necessary

urinal - n. a toilet that is attached to a wall especially in a public bathroom for men to use