Update Required To play the media you will need to either update your browser to a recent version or update your Flash plugin.
By VOA
26 July, 2016

Monday was the opening night of the Democratic National Convention in Philadelphia, Pennsylvania. The Democratic Party is set to officially name Hillary Clinton as its presidential nominee.

The first night of the political meeting included many high-profile speeches in support of Clinton. Vermont Senator Bernie Sanders was until recently a Democratic presidential candidate himself. In his speech, he spoke directly to his supporters in the audience and across the country. He urged them to now support Hillary Clinton for president.

Elizabeth Warren also spoke. The Massachusetts senator attacked Republican presidential candidate Donald Trump, calling him "a man who must never be president of the United States."

But, it was First Lady Michelle Obama who stole the show in Philadelphia. Her powerful and emotional speech is already being called, by some, one of the best speeches in Democratic National Convention history. 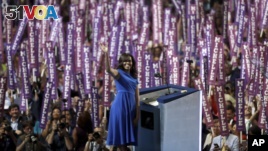 First Lady Michelle Obama waves as she speaks to delegates during the first day of the Democratic National Convention in Philadelphia , Monday, July 25, 2016. (AP Photo/Matt Rourke)

She spoke as a mother who wishes for the next president to be a role model for her two children and for children across America. She said that, "in this election there is only one person I trust with that responsibility, only one person who I believe is truly qualified to be president of the United States, and that is our friend Hillary Clinton."

She praised Clinton for her record as a public servant and her "lifelong devotion to our nation's children."

Obama became emotional when she talked about living for the past eight years in the White House, a house, she said "that was built by slaves."

She said that she has watched her children, "two beautiful intelligent black young women playing with their dogs on the White House lawn."

The first lady also said that Hillary Clinton has shown her daughters and children around the country that it is possible for a woman to be president of the United States.

Obama did not say Trump's name once in her 14-minute speech. But, she made remarks clearly directed at him.

She said that she wants the next president to be "someone who understands that the issues a president faces are not black and white and cannot be boiled down to 140 characters."

And, she told the audience to not "let anyone ever tell you that this country isn't great, that somehow we need to make it great again."

The New York Daily News even decided to quickly change its Tuesday front cover after Obama's speech. It read: The Lady Is Her Champ."

But her 2016 speech may go down as one of the most memorable of the entire election season.

What do you think of Michelle Obama's speech? Let us know in the comments section!

devotion -- n. the use of time, money, energy, etc., for a particular purpose

steal the show -- expression. attract the most attention and praise

remark - n. something that someone says or writes to express an opinion or idea

boil down - phrasal verb. to shorten, simplify or summarize

slogan -- n. a word or phrase that is easy to remember and is used by a group or business to attract attention

champ - n. (short for champion) someone who fights or speaks publicly in support of a person, belief, cause, etc.