Update Required To play the media you will need to either update your browser to a recent version or update your Flash plugin.
By VOA
08 June, 2017

The astronauts will work for NASA, the American space agency. 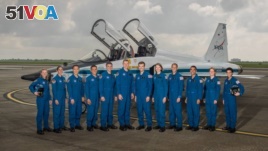 The astronaut class of 2017 includes doctors, scientists, engineers, pilots and military officers. Seven are men and five are women. The youngest is 29 years old. The oldest is 42.

More than 18,300 people applied to become astronauts. NASA says they contacted the space agency during a short application period that began in late 2015. That is more than double the record number of 8,000. The earlier record was set in 1978, when the agency was preparing for the first launch in its space shuttle program.

The 12 new astronauts will join 44 astronauts already with NASA. The last time the space agency launched astronauts from American soil was 2011, when the space shuttles were retired. Since then, NASA has depended on the Russian space program to get Americans to the International Space Station.

However, that could change next year.

After two years of training, the new astronauts could travel to the space station or fly beyond the moon in NASA's Orion spacecraft. But the space agency would depend on private businesses for rockets and other equipment.

SpaceX and Boeing are building capsules to carry astronauts to the space station and back. Those vehicles could be ready for use as soon as next year.

A launch engineer and top official with SpaceX, Robb Kulin, is among the 12 new astronauts. "Hopefully, one day, I will actually fly on a vehicle that ... I got to design," he said.

Kulin and his classmates may be in for a long wait, however. Some members of the class of 2009 have yet to launch.

This is NASA's 22nd group of astronauts. The first group, the Mercury 7 astronauts, was chosen in 1959.

Three hundred fifty Americans have been chosen to become astronauts. Requirements include U.S. citizenship; college degrees in science, technology, engineering or mathematics; and at least three years of experience or 1,000 hours of piloting jets.

committed - adj. willing to give your time, energy, etc., to something

noble - adj. having, showing, or coming from personal qualities that people admire (such as honesty, generosity, courage, etc.)

apply - n. to ask formally for something (such as a job, admission to a school, a loan, etc.) usually in writing