Update Required To play the media you will need to either update your browser to a recent version or update your Flash plugin.
By Hai Do
05 February, 2018

The "underdog" Philadelphia Eagles football team has won its first Super Bowl. The team defeated the favored New England Patriots in the National Football League championship Sunday night in Minneapolis, Minnesota. The final score was 41 to 33.

Eagles quarterback Nick Foles was named Super Bowl 52's Most Valuable Player, or MVP. Foles was backup quarterback for most of the 17-week regular season. He replaced starter Carson Wentz when he was injured in week 14.

The last time a player has gone from a backup at the start of the season to Super Bowl MVP was sixteen years ago. That player was Tom Brady, the quarterback of the Patriots. Brady led his team in play Sunday night also. 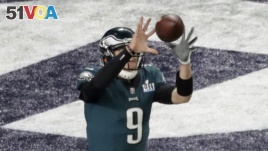 Foles threw for three touchdowns and even caught the ball in a trick play. Brady dropped a pass in a similar play. However, he broke a Super Bowl record in passing.

Twenty-eight other Super Bowl records were tied or broken during the game. The game was the second highest-scoring Super Bowl ever.

Hometown newspaper, The Philadelphia Inquirer, reported the scene this way:

"Men hoisted women on their shoulders, a father set off fireworks with his son, and residents clobbered pots and pans... Some people drank champagne. Some cried. And everywhere, Eagles chants thundered through the air."

Some of the celebrations turned ugly, however. People broke windows of a department store and pushed over streetlights at major road crossings. In another incident, a car was overturned outside a hotel. And the mayor's office said police made three arrests in connection with the post-Super Bowl activities.

By the morning light, city workers were out to clean up the mess and prepare for a victory parade on Broad Street.

Hai Do adapted this story for Learning English based on reports from the Associated Press and other sources. Caty Weaver was the editor.

trick - n. something done to surprise or cause confusion

Hail Mary - n. in American football, a long pass thrown into or close to the end zone as playing time runs out

hoist -v. to raise something

prepare - v. to make something ready for some activity