Why Are Americans so Angry?


Americans are angry and growing more frustrated, but the reasons are mixed.

At shopping day sales, they fight over who gets the biggest television.

At their children's soccer games, they attack the coach if their team is not winning. 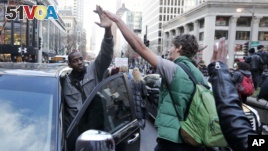 Motorists stuck in traffic due to protesters marching in Chicago calling for Chicago Mayor Rahm Emanuel and Cook County State's Attorney Anita Alvarez to resign in the wake of a police scandal, Wednesday, Dec. 9, 2015, in Chicago. (AP Photo/Charles Rex Arbogast)

Political candidates use language that insults America's friends and neighbors.

And in the extreme, some become so angry over issues of religion, politics and power that they commit mass murder on strangers. Or threaten people with religions they do not like.

"I just received a death threat in my own office," Representative Andrew Carson, a Democrat from Indiana told CNN Tuesday. "And it is largely (due) to the environment, this toxic environment."

Carson is one of two Muslim-Americans in Congress. He says the death threat came one day after Republican Donald Trump declared he would ban Muslims from traveling to the U.S., if he is elected president.

But Americans are also angry and divided about continued economic struggles. Also fueling the anger are divisions over such issues as immigration, same-sex marriage, abortion, gun control, police treatment of African-Americans and climate change.

Just in the last week:

Robert Thompson is director of Syracuse University's Bleier Center for Television and Popular Culture. He says no one can argue that Americans have a lot to be angry about.

But it does not mean the anger has reached historic levels, Thompson says.

It used to be that angry Americans had fewer options to express their anger. You could write a letter to your local newspaper, but by the time it was published, you had time to cool off. Those were times before cable television news and the Internet.

Says Thompson: "Now, we all get to show how angry we are. We can go on the Internet and proclaim our anger to the entire world. It is not like we have not been angry before. Settlers to America were angry enough at the British to begin a revolution."

The reasons people say they are unhappy include: a shrinking middle class, young people worried about debt and job prospects, a growing concern about terrorism and a belief the political system favors the wealthy, according to polls by the Wall Street Journal/NBC and the Pew Research Center.

Despite 62 straight months of job growth, many Americans worry about their ability to meet future costs.

Twenty seven percent of baby boomers expect to run out of savings before they die, according to a June survey by Northwestern Mutual Life Insurance Company. Baby boomers are people born between 1946 and 1964.

And Generation Xers – people born between 1965 and 1980 – are also nervous. Thirty seven percent do not "at all feel financially secure," and 20 percent expect to outlive their savings, the Northwestern Mutual survey found.

Russell Jones is director of the Stress and Coping Lab and a psychology professor at Virginia Tech University. He said recent terror attacks and mass shootings raise stress levels.

"The increase in trauma we are hearing, watching and reading about and, in some cases, experiencing, is making the anger and stress more prevalent," Jones says.

He is referring not only to the San Bernardino shootings, but also recent attacks: the Paris terror attacks, which killed 130 people and the shootings at a Planned Parenthood clinic in Colorado, which killed three. On Monday, ceremonies will mark the third anniversary of the attack that killed 20 first graders and six educators at a Newtown, Connecticut elementary school.

Mary Niall Mitchell, a history professor at the University of New Orleans, says this is an important time for the United States. There are rapid changes in social norms, for example, legalization of same-sex marriage, a growing immigrant population and continuing protests to pressure police departments and colleges to treat African-Americans fairly.

Some are uncomfortable with those changes, but others do not think change is happening fast enough, she says.

Says Mitchell: "From the historian's perspective, angry societies are double-edged: anger can result in bigotry, oppression and violence, but can also be a means of liberation and over time, produce more equitable societies."

For some, the current climate is becoming too much.

Kat Goldman, a singer-songwriter who lives in Boston, posted on her Facebook page that recent events in America are prompting a return to her native Canada.

"The U.S. truly is the land where dreams are made, and I made some of my own dreams come true while I was here," Goldman says.

But she cites some reasons to leave: "out-of-control gun violence," Donald Trump's call to ban Muslim visitors and "this group of people (terrorists) who want to blow us up."

frustrated – adj. very angry, discouraged, or upset because of being unable to do or complete something

assault – v. the crime of trying or threatening to hurt someone physically

commit – v. to do something that is illegal or harmful

stranger – n. someone who you have not met before or do not know

prevalent – adj. happening often or over a large area

proclaim – v. to declare or announce something

shrinking – adj. to become smaller in amount, size, or value

prospects – n. the possibility that something will happen in the future

psychology – n. the science or study of the mind and behavior

perspective – n. a way of thinking about and understanding something

equitable – adj. dealing fairly and equally with everyone