When You 'Raise the Bar,' Things Get Hard

Update Required To play the media you will need to either update your browser to a recent version or update your Flash plugin.
By Anna Matteo
06 March 2021

On this program we explore words and expressions in American English. Today we talk about a common idiom from sports: To raise the bar.

To raise the bar means to set a high standard and to raise expectations. It can also mean to set higher goals.

You can raise the bar for yourself or for others. But we often use this expression when someone's performance is much better than others.

When you raise the bar, you increase the expectations of people who have settled into a way of doing things. For example, let's say a person is really good at playing a video game. If he joins a team game, his skill level will raise the bar. The other players will have to play better to come up to the new level of competition.

When you use the expression, you can sometimes put a word before "bar." This will describe the situation better.

For example, when a new intern started at VOA Learning English for his fall semester, he would wear a suit during online video meetings. Most of us who had been working at home for many months, did not dress up. We looked presentable, but our clothes were not formal. So, he really raised the clothing bar for our weekly meetings.

Let's say you are invited to go to a potluck party. At a potluck party, everyone is supposed to bring one thing to drink or eat. You make a very tasty cake with four layers and fancy decorations. The host might say, "Wow you really raised the potluck bar for the rest of the people at the party."

Word experts say people began using the idiom "raise the bar" around the turn of the twentieth century.

It comes from the sport of track and field, specifically the high jump and the pole vault events. 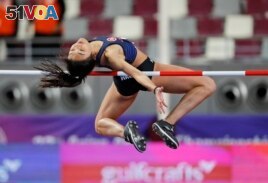 These events involve raising a bar incrementally, or a little at a time, to see how high the athletes can jump or vault over a bar.

Now let's hear these two friends use the expression together.

A: How's the new job going?

B: Great! I go into the office an hour early every day and stay late almost every night. Plus, I get all my work done days ahead of my deadlines.

A: Aren't you worried that you might be raising the bar a bit too high?

B: No way! If other people can't perform as well, that's good for me, right?

A: Well, you don't want to raise the bar SO high that one day YOU have trouble getting over it.

B: You know, that's a really good point. I never thought of it like that.

A: That's what friends are for.

And that brings us to the end of this week's Words and Their Stories. When it comes to teaching American English, we hope we raise the bar just a little bit higher for English learners.

idiom –n. an expression that cannot be understood from the meaning of its separate words

standard –n. a level of quality or performance that is considered acceptable or desired

semester –n. one of two, half-year periods that make up an academic year at a school or college

pole vault –n. an athletic event in which people compete by using a pole to jump over a bar this is high above the ground

incrementally –n. a small amount by which something is made larger, greater or higher