Where Have All the Bees Gone?

Update Required To play the media you will need to either update your browser to a recent version or update your Flash plugin.
By Christopher Jones-Cruise
19 April, 2015


Bees play an important part in the growth of crops.

About 4,000 wild bee species are native to North America. Other bee species on the continent were imported from Europe to produce honey.

Bees also serve as crop pollinators. These pollinators carry material from one plant to another. This helps the plants produce seeds. A honey bee packs pollen from this almond tree blossom before returning to her hive.

But for the past 40 years, the native bee population has been decreasing. Since the winter of 2006, many honeybees have disappeared. Scientists call this "Colony Collapse Disorder." 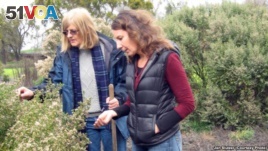 VOA recently went to the town of Lockeford, in the Central Valley of California. Researchers there are mixing plants to try to bring back the bees. Margaret Smither-Kopperl is a botanist, a scientist who studies plants. She leads the Lockeford Plant Materials Center. It is one of more than 24 centers around the country operated by the United States Department of Agriculture. The centers are working to rebuild and support healthy ecosystems.

For the past several years, Ms. Smither-Kopperl has planted different kinds of flowers, grasses and other plants. She is trying to create a combination of plants that bees will like.

"On the right I have a planting of native grasses. And, then, in the other field, where you can see that it's green, we've planted eight different commercial pollinator mixes." 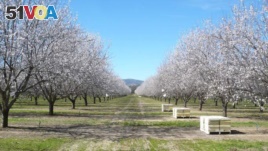 About 1.7 million bee colonies have been trucked into California from all over the country for the almond pollination season, which typically begins around Valentine's Day.

Life is not easy for bees. They must deal with pesticides and smaller animals that live on or in them, such as bee mites. But the biggest difficulty is the destruction of areas where they live and eat. Jessa Kay Cruz works at The Xerces Society, a conservation group.

She says growth in agriculture industries and the growth of cities have left bees too few natural areas where they seek their food: Pollen and nectar.

These two plant substance make up 100 percent of a bee's food. So, Ms. Cruz says, bees are totally dependent on some kinds of flowers for their survival.

"About 85 percent of the world's flowering plants require a pollinator basically in order to reproduce. In our agricultural ecosystems, about one in every three bites of food or drink that we consume requires pollinators."

She says honeybees raised by farmers also face problems. She says farmers provide the bees with food that does not give them what they need when crops are not available. She says that damages the health of the bees.

But Ms. Cruz says a more serious threat to honeybees is colony collapse disorder. No one knows what causes it or how to stop it.

"We know that beekeepers will go out and find their hives mysteriously empty but, they're not finding necessarily a hive full of dead bees -- there's (there are) just no bees."

Ms. Cruz works with Ms. Smither-Kopperl to choose and plant the mix of plants at the Lockeford center. They examine whether the plants they have grown bring back native bees that can be used to provide pollination to local farms.

The two women also urge farmers to put plants that bees like in areas where crops are not planted. These include equipment and vehicle storage areas and areas next to roads and fields.

pollinator – n. something that gives (a plant) pollen from another plant of the same kind so that seeds will be produced

pollen – n. the very fine usually yellow dust that is produced by a plant and that is carried to other plants of the same kind usually by wind or insects so that the plants can produce seeds

Are bee colonies healthy in your country? We want to hear from you. Write your thoughts in the comments section.