Update Required To play the media you will need to either update your browser to a recent version or update your Flash plugin.
By Mario Ritter Jr.
27 April 2020


Many people are asking where North Korean leader Kim Jong Un could be. The secretive leader has not been seen in public for more than two weeks. As a result, rumors are spreading about whether something happened to him.

The United States and its allies, including South Korea and Japan, closely watch the health of North Korea's leaders. That is because the country controls nuclear weapons which the government has repeatedly threatened to use.

Some reports say Kim has injured his lower leg. Others say he has kidney problems or that he had an unsuccessful heart operation. Some say he is staying separated to avoid the new coronavirus. There even is a report that he was injured in a failed missile test. 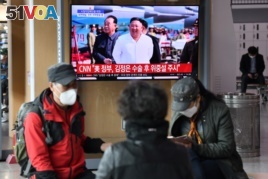 Rumors are also spreading about Kim's current condition. Some reports have said he is in a vegetative state or is dead. Other reports say there is nothing wrong with his health.

The rumors began after Kim Jong Un failed to attend the birthday observance of his grandfather, Kim Il Sung. The day, April 15, is very important in North Korea's culture of respect for and obedience to the ruling family.

After that, The Daily NK, a website based in Seoul, reported that Kim had had a heart operation. It said Kim reportedly was having health problems caused by smoking and his weight.

The same day, the American cable news channel CNN reported that Kim was in "grave danger" after a medical operation.

North Korea has not answered the rumors. State operated media have said that the leader is carrying out business as usual. But no recent pictures of Kim have been published.

"North Korea does not react to rumors about the leader's health," Lee said.

Kim reappeared in 2014 using a cane for support. North Korean media said only that he had experienced "discomfort" but did not give details.

South Korea has not supported reports about Kim being in poor health. On Monday, South Korean Unification Minister Kim Yeon-Chul said South Korea's intelligence can say there is "no unusual movements" in the North.

An adviser to South Korean President Moon Jae-in recently said, "Kim Jong Un is alive and well. He has been in the Wonsan area since April 13."

Additional reports say there has been an increase in the buying of cleaning supplies and imported foods in North Korea. The increase began on April 20, a person in the North Korean capital Pyongyang told VOA. However, the person said the buying might have been connected to an extended coronavirus lockdown. It has reported no cases of infection from the virus, a claim that experts dispute.

Bruce Klingner is a North Korea expert at the Heritage Foundation in Washington. He said, "Over the years, there have been many false reports exclaiming the decline health or death of Kim Jong Un."

Andray Abrahamian, another North Korea expert, said that "reasonable speculation" about Kim's health has turned into a lot of false reports and "hyperbole."

Bill Gallo reported this story for VOANEWS. Mario Ritter Jr. adapted it for VOA Learning English with additional information from the Associated Press. Ashley Thompson was the editor.

rumor –n. a story that could be true or false which is spread widely, but which comes from an unknown source

cane –n. a short stick, often with a curved handle, that people use to help them walk

lockdown –n. a situation in an emergency in which people are required to stay in a secure place

speculation –n. ideas and guesses about something that is not known

hyperbole –n. a description of something that is either much better or much worse than it really is