Where Is the 'Wrong Side of the Tracks'?

Update Required To play the media you will need to either update your browser to a recent version or update your Flash plugin.
By Anna Matteo
03 September 2022

On this program, we explore words and expressions in the English language. We give examples and notes on usage. And sometimes we tell you how the expression came into use.

Today we talk about train tracks. 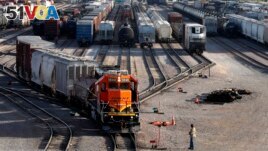 FILE - A BNSF rail worker monitors the departure of a freight train on June 15, 2021, in Galesburg, Illinois.

Imagine a town that has a railroad and train tracks running through it. Trains may be great to travel on, but crossing their tracks can be dangerous. Bright lights and warning signals at tracks can only do so much. Train tracks often will divide a town in two.

One side is often more desirable than the other. The houses are usually bigger or newer. Public resources, like schools and parks, are more available or are better operated. There might be better stores, restaurants and fewer crimes reported on the desirable side of town.

The other side of the tracks, and town, might be poorer. The houses are smaller or less modern. It also might be where factories, trash dumps, and other industrial sites are found. Community centers, playgrounds, and similar places may be few and far between. This means there aren't many of these facilities.

That kind of town, separated by a "good" side and a "bad" side, is at the heart of the expression the "wrong side of the tracks."

"Tracks" refers to the railroad tracks. These sometimes were thought of as splitting a town between the haves and have nots. If I am from the wrong side of the tracks, I am from the poor part of a town.

We use this expression another way.

Sometimes we don't even know where a person is from. But if they often cause or get into trouble, someone might say they are bad news and are from the wrong side of tracks.

Now, crossing the tracks either for love or to create a richer life, is a popular idea in stories.

Many popular movies are about star-crossed lovers who are from different sides of the tracks. Their different economic conditions and cultural backgrounds form a barrier. Their families and friends try to keep them apart. But in the end, they overcome these obstacles, fall in love, and live happily ever after. At least in the movies.

Dirty Dancing is one of these popular movies. She is a upper-middle class girl. He is a working-class dance teacher. They meet at a summer camp and their shared joy of dance brings them together. The barriers break down.

Lady And The Tramp, Pretty Woman, and Grease are other very popular movies centered on this idea.

Sometimes the story is about two groups of people from either side of the tracks who can't seem to get over their differences and get along.

And that's all the time we have for this Words and Their Stories. Don't forget to practice using the expression to be from the wrong or right side of the tracks.

Until next time, I'm Anna Matteo!

obstacle – n. something that stands in the way or opposes

adopt – v. to take by choice into a relationship especially : to take voluntarily (a child of other parents) as one's own child