Where Villages Once Stood, Africa Now Has an Inland Ocean

Update Required To play the media you will need to either update your browser to a recent version or update your Flash plugin.
By Susan Shand
22 March, 2019


Flooding remains a serious problem in Southern Africa more than a week after Cyclone Idai hit the area.

Idai is one of the most destructive natural disasters in the area's history. The storm left hundreds of people dead and extensive damage in Mozambique, Zimbabwe and Malawi.

Floodwaters are moving across central Mozambique. Many homes, some towns and villages are still underwater. The water has created an inland sea -- more than 2,500 kilometers wide -- in an area where there used to be farms and villages. 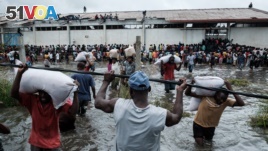 People take sacks of rice from a warehouse surrounded by flood waters from Cyclone Idai, in Beira, Mozambique, March 20, 2019.

Mozambican President Filipe Nyusi estimated that the cyclone may have left as many as 1,000 people dead nationwide. There are fears the death toll could jump sharply when rescuers reach the countryside.

Heavy rainfall stopped Thursday, and floodwaters began to subside in the port of Beira and in the countryside, the Mozambican government said. Aid groups were working without rest to rescue families holding onto trees or standing on building tops to escape the water.

On Thursday, "910 people were rescued by the humanitarian community," said Caroline Haga of the International Federation of the Red Cross in Beira. She spoke to The Associated Press.

Aid organizations are trying to get food, clean water and clothing to the areas hardest hit by the storm. They estimate more than 400,000 people across Mozambique are now homeless.

The country's environment minister, Celso Correia, said the government plans to build two large camps to house people who have lost their homes.

Gerald Bourke is the United Nations' World Food Program. He said it was unclear how the government would get people to those camps. "There's talk of using...helicopters and boats.

It will be days before the water in Mozambique drains toward the Indian Ocean. It will be longer before officials fully understand the level of destruction.

In neighboring Malawi, at least 56 people are confirmed dead and more than 900,000 are homeless.

The search for survivors is finished.

Aid has been slow to reach affected villagers because many roads and bridges were destroyed.

Zimbabwean President Emmerson Mnangagwa visited affected areas on Wednesday. Government officials have said that as many as 350 people may have died in the flooding. The force of the water pulled some victims from Zimbabwe down the mountainside into Mozambique, officials said.

In one area, the district of Chimanimani, 90 percent of homes and property suffered major damage, the World Food Program said. It estimated that 200,000 people would need food assistance over the next three months.

Philemon Dada has been rebuilding his life in Chimanimani, once a beautiful town.

With a few tools, he began pulling long sticks from the water to build a shelter for his family. He believes it will be difficult to rebuild his life after Cycone Idai. He lost everything – his home and his animals.

Some people are living with neighbors and others with their religious leaders.

"I can say I am a bit lucky, my wife and son are still here with me but for everything else, I have to start (over)," he said.

"It may take a year, maybe even more years just to get back on my feet," he added.

toll – n. the number of deaths or injuries resulting from an event, such as a natural disaster or war

subside – v. to go down to a lower level

drain – v. to flow into, away from, or out of something

district – n. a part of a city or country