Which Technologies Could Help the World Reach its Climate Goals?

Update Required To play the media you will need to either update your browser to a recent version or update your Flash plugin.
By Bryan Lynn
07 November 2021


The United Nations Climate Change Conference, known as COP26, is continuing in Glasgow, Scotland. World leaders, climate experts and activists have gathered in an effort to negotiate new action plans to fight the widespread effects of climate change.

Technology is likely to play a big part in helping the world reach its climate goals in the future. Here is a closer look at some possible technology-based solutions. 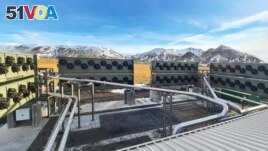 Fusion is the process that fires the sun. But some experts say it could someday power our homes.

Fusion happens when the nuclei of two atoms are subjected to extreme heat. This leads to the formation of a new larger atom and large amounts of energy.

One problem is that the process itself requires a large amount of energy. Developers of the technology have not yet performed a fusion reaction that releases more energy than it requires. In addition, running an electric power plant off of fusion would require the resulting heat to be contained in an economical way.

Still, scientists at Britain's Oxford University, America's Massachusetts Institute of Technology and other places say they are making progress. The British government believes a working model for producing electricity can be in place by the year 2040.

Advanced nuclear plants would be smaller than today's massive nuclear reactors. Experts say they could be used in rural areas and could take over for wind and solar power when the sun goes down or the wind dies.

But advanced nuclear reactors are difficult and costly to build. Critics say they would also create more dense waste. And they would run on uranium, which is far more enriched than fuel used in today's reactors. That could make some advanced reactors more appealing to militants seeking materials to make weapons.

In the United States, Bill Gates has said he aims to build a reactor that uses advanced nuclear technology for about $1 billion. His plans call for many advanced nuclear plants to be operational by the 2030s. China, Russia and Japan are also working on the technology.

Last month, a Swiss company announced it had launched the world's largest carbon capturing plant in Iceland. The system captures carbon dioxide (CO2) directly from the air and puts the gas underground.

Currently, there are 15 direct air capture plants operating worldwide. The International Energy Agency (IEA) estimates the plants capture more than 9,000 metric tons of CO2 per year. While that might sound like a lot, it is about equal to the amount produced by about 2,000 cars over the same period.

Carbon capturing costs are currently high -- in the range of $600 per metric ton of CO2 captured. But supporters say those costs will fall as the technology improves.

Supporters also say tax breaks for businesses in the U.S. and other countries could help the technology. But critics, including the environmental group Sierra Club, say offering large credits could actually lead to more plants continuing to burn fossil fuels.

Hydrogen can be mixed with natural gas to make a cleaner-burning fuel. This could power a fuel cell vehicle. Such a vehicle would release environmentally friendly water vapors.

So-called clean hydrogen can be produced using energy methods such as wind and solar. But those methods are more costly than "grey hydrogen," which is made with fossil fuels.

Another possibility, known as "blue hydrogen," can be made in natural gas plants that capture carbon. But some scientists say that process can release methane gas, which would make hydrogen no cleaner than natural gas itself.

Geothermal power plants capture heat up to 370 degrees Celsius far below the Earth's surface. The heat creates steam that can turn turbines to produce electricity.

The United States, Indonesia, the Philippines and Kenya lead the world in geothermal electricity production. But the technology would need to greatly expand to become a major alternative to fossil fuels.

Experts estimate the U.S. has the capacity to produce 10 percent of the country's current power demand through geothermal power. But startup costs to build the technology are high. This has prevented major investments so far. Countries lacking in fossil fuel resources, including Japan and Singapore, are seeking to develop geothermal power.

advanced – adj. having progressed or developed to a late stage

enrich – v. to improve the quality of purity of something such as a substance

methane – n. a gas that has no color or smell that is used for cooking and heating

alternative – n. one of two or more things that you can choose between

capacity – n. the largest amount or number that can be held or contained