Update Required To play the media you will need to either update your browser to a recent version or update your Flash plugin.
By Dona de Sanctis
06 November, 2014


Editor's Note: This is a weekly multimedia series of American short stories for English language learners. Each story has video, audio, quizzes, and a lesson plan for teachers. Hope you enjoy reading and listening to this story! Please leave your questions and comments below.

The forest was full of shadows as a little girl hurried through it one summer evening in June. It was already eight o'clock and Sylvie wondered if her grandmother would be angry with her for being so late.

Every evening Sylvie left her grandmother's house at five-thirty to bring their cow home. The old animal spent her days out in the open country eating sweet grass. It was Sylvie's job to bring her home to be milked. When the cow heard Sylvie's voice calling her, she would hide among the bushes.

The cow finished drinking, and as the nine-year-old child hurried through the forest to the home she loved, she thought again about the noisy town where her parents still lived.

After eating, they all sat outside. The young man explained he was a scientist, who collected birds. "Do you put them in a cage?" Sylvie asked. "No," he answered slowly, "I shoot them and stuff them with special chemicals to preserve them. I have over one hundred different kinds of birds from all over the United States in my study at home."

"So Sylvie knows all about birds. Maybe she can help me then," the young man said. "I saw a white heron not far from here two days ago. I've been looking for it ever since. It's a very rare bird, the little white heron. Have you seen it, too?" He asked Sylvie. But Sylvie was silent. "You would know it if you saw it," he added. "It's a tall, strange bird with soft white feathers and long thin legs. It probably has its nest at the top of a tall tree."

Sylvie's heart began to beat fast. She knew that strange white bird! She had seen it on the other side of the forest. The young man was staring at Sylvie. "I would give ten dollars to the person who showed me where the white heron is."

But Sylvie watched the young man with eyes full of admiration. She had never seen anyone so handsome and charming. A strange excitement filled her heart, a new feeling the little girl did not recognize...love.

At last evening came. They drove the cow home together. Long after the moon came out and the young man had fallen asleep Sylvie was still awake. She had a plan that would get the ten dollars for her grandmother and make the young man happy. When it was almost time for the sun to rise, she quietly left her house and hurried through the forest. She finally reached a huge pine tree, so tall it could be seen for many miles around. Her plan was to climb to the top of the pine tree. She could see the whole forest from there. She was sure she would be able to see where the white heron had hidden its nest. 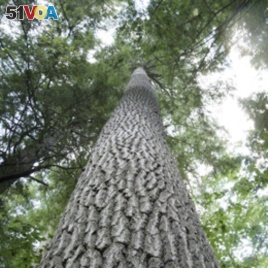 About an hour later Sylvie appeared. Both her grandmother and the young man stood up as she came into the kitchen. The splendid moment to speak about her secret had come. But Sylvie was silent. Her grandmother was angry with her. Where had she been? The young man's kind eyes looked deeply into Sylvie's own dark gray ones. He could give Sylvie and her grandmother ten dollars. He had promised to do this, and they needed the money. Besides, Sylvie wanted to make him happy.

You have been listening to the story called "A White Heron" by Sarah Orne Jewett. Dona de Sanctis wrote this version for VOA Learning English. Your narrator was Kay Gallant.