Update Required To play the media you will need to either update your browser to a recent version or update your Flash plugin.
By Caty Weaver
16 September, 2016


The American poet Carl Sandburg once said, "Poetry is an echo, asking a shadow to dance."

Recently five young people were named to lead that dance for the next year. They are the National Student Poets. They recently enjoyed a ceremony in their honor at the White House.

President Barrack Obama and his wife, Michelle, created the program to honor student poets from five areas of the country.

The first lady said that they felt the program was necessary to prevent the arts from becoming lost in schools.

"What we knew is that loss was pretty devastating because we all know what the evidence shows is that when kids are involved in arts, they do better in school and in life. They have higher grades. They have fewer behavioral problems. We talk about this at almost every event. They are more likely to go to college, to graduate, and go on and do wonderful things."

About 70,000 young people apply to the program each year. A team of poets and artists choose the winners. 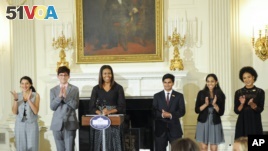 This year's student poets include 17-year-olds Stella Binion of Illinois, Maya Eashwaran of Georgia, Gopal Raman of Texas, and Joey Reisberg of Maryland.

Sixteen-year-old Maya Slameh is from California. The Lebanese American read her poem "Sacrilege Incorporated" at the event held in the White House.

Maya said she wanted to write to express her feelings about being Arab-American. She wanted to show how that identity was not always a comfortable one.

Maya Eashwaran is Indian American. Her poem "Linguistics" is about losing some of her Indian identity to American culture.

Maya says the poem was written at a time when she began to realize that she was losing some of her culture, some of her history.

"I was writing the poem after I had realized that I was speaking more English than my mother tongue."

Each National Student Poet spends a year attending poetry classes. They also go to art festivals and do a community service project.

Some of the past winners have taught poetry to women prisoners, worked with veterans, and helped people with Alzheimer's.

Stella Binion is from Chicago. She says that her dream is to work with and inspire other students, especially African American girls.

"My dream would be to work with young girls of color, specifically black girls, to, like, empower their voices and (make them) feel like their voices are important and heard through the lines of poetry because that's what poetry has been for me, in terms of, like, my experience as a young black woman."

Joey Reisberg of Towson, Maryland, says he hopes to help develop poetry workshops in Baltimore. Rioting broke out in that city last year, in connection with the arrest and death of an unarmed black man named Freddy Gray. Reisberg says he wants to show that there is much more to Baltimore than the recent unrest.

"I'm thinking less in terms of my own work, and more in terms of, like, leading workshops for Baltimore poets to show that the city isn't as divided as it seems. We're all still people."

At the ceremony, Michelle Obama said she could not have been prouder of all the student poets – from 2016 and earlier years.

Do you read or write poetry? What does it mean to you? Let us know by posting in the Comments Section, or visit our 51VOA.COM.

echo – n. the repeated sound that is heard when sound waves bounce off of distant object

shadow – n. a dark area of blocked light that appears when something blocks a light source

inspire – v. to make (someone) want to do something