Update Required To play the media you will need to either update your browser to a recent version or update your Flash plugin.
By VOA
09 June, 2015

White House spokesman Josh Earnest was speaking to reporters at the time.

A Secret Service dog was deployed to check the area for explosives. A short time later, reporters returned to the room where the briefing restarted. 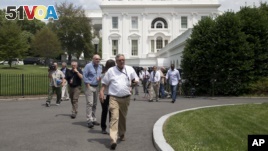 Reporters and others are evacuated from the White House, June 9, 2015, following a bomb threat.

Earlier, a hearing of the Transportation Security Agency, TSA, on Capitol Hill was also cleared because of a bomb threat.

Capitol police evacuated several levels of the Senate office building but found no dangerous materials. Josh Earnest told reporters he did not know if the two threats were related.

Mr. Obama said the U.S. military is working on plans to improve the training effort, and that those who have been trained are operating "effectively." He also said recruiting, especially from Sunni tribes, needs to be a priority.

HSBC to dismiss tens of thousands of workers

One of the world's largest banks, HSBC, is planning to dismiss up to 50,000 employees. The move is part of an overhaul of the bank's international operations. It plans to focus more on Asia. It might even move its headquarters out of London.

The job cuts affect about 19 percent of the HSBC staff over the next two years. Half of those cuts will come from selling operations in Turkey and Brazil. Thousands of jobs cuts will also come from the U.K.

HSBC operates in more than 70 nations with over 6,000 branches, and has tens of millions of customers. The bank has assets of more than $2.6 trillion.

Dennis Hastert, former speaker of the U.S. House of Representatives, told a court Tuesday that he is not guilty of federal charges against him. Mr. Hastert is charged with illegal bank withdrawals and lying to investigators. A Chicago court released him after he paid a $4,500 bond to guarantee his return to court for trial.

The 73-year-old is suspected of paying as much as $3.5 million to someone to make up for and hide past wrongdoing. Reports say the wrongdoing involved sex.

evacuate – v. to remove a person or people from a dangerous place

focus – v. to direct attention or effort at something specific

asset ­– n. something that is owned by a person, company, etc. — usually plural