Update Required To play the media you will need to either update your browser to a recent version or update your Flash plugin.
By Bryan Lynn
18 February 2022


The World Health Organization (WHO) has identified the first six African countries to receive the technology to produce mRNA vaccines.

The nations will be Egypt, Kenya, Nigeria, Senegal, South Africa and Tunisia. The WHO announcement came Friday during a meeting of European Union and African Union countries in Brussels, Belgium.

mRNA is the technology that companies such as Pfizer-BioNTech and Moderna used to create their COVID-19 vaccines. But those companies have centered on commercial operations to make their vaccines widely available in most Western nations across the world. 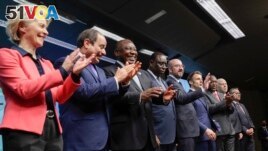 Pfizer-BioNTech and Moderna have chosen not to share their vaccine production technology with the WHO and its partners in an effort to get more vaccines to poorer countries. The six nations named Friday were chosen to build vaccine production centers that will aim to copy the mRNA technology.

The WHO estimates that only 11 percent of the population in Africa is fully vaccinated, compared with a worldwide average of about 50 percent.

A United Nations-backed effort known as COVAX to bring COVID-19 vaccines to lower-income countries has already missed numerous targets. So far, only about 10 percent of people in poorer countries have received at least one vaccine injection.

WHO Secretary-General Tedros Adhanom Ghebreyesus told the Brussels meeting that although more than 10 billion COVID-19 shots have been given, much of the world remains unvaccinated. "The tragedy, of course, is that billions of people are yet to benefit from these life-saving tools," Ghebreyesus said.

Last June, the WHO chose a group of South African companies to run its worldwide mRNA "hub." The hub is designed to lead efforts to develop mRNA vaccine technology for lower and middle-income nations.

From that effort, South African company Afrigen Biologics said it was able to replicate Moderna's vaccine technology to produce its own version of the American company's COVID-19 shot. But the WHO has said the first approval of Afrigen's candidate vaccine may not come until 2024.

The hub has already begun establishing mRNA vaccine manufacturing laboratories and is working to launch commercial production. Training involving the chosen countries is expected to begin next month.

At an event at its production center in Marburg, Germany, the company presented a model of the kind of vaccine production center it plans to ship to Africa. The presentation was attended by Ghebreyesus and the presidents of Senegal, Ghana and Rwanda.

Each center will be made from a collection of shipping containers that can be put together upon arrival. The manufacturing centers will include all equipment needed for making the company's mRNA vaccine.

BioNTech said the first manufacturing center is expected to be shipped to either Senegal or Rwanda in the second half of this year. The company says it aims to start production of up to 50 million vaccine shots per year within 12 months.

"Our goal is to enable mRNA production on all continents," BioNTech chief Ugur Sahin told The Associated Press.

BioNTech said its employees would run the operations at first while the company trains local partners to take over the manufacturing process.

benefit – v. to be helped by something

hub – n. a place that is the center of a particular activity

replicate – v. to make or do something again in exactly the same way