WHO Chief Tedros Is Reelected to Second Term

Update Required To play the media you will need to either update your browser to a recent version or update your Flash plugin.
By Bryan Lynn
24 May 2022


World Health Organization (WHO) Director-General Tedros Adhanom Ghebreyesus has been reelected to a second term.

His reelection was confirmed Tuesday by the WHO's governing body, the World Health Assembly. The vote came during a meeting in Geneva, Switzerland. The assembly includes 194 member states.

Tedros was the only candidate running for the position. His new term will officially begin on August 16, 2022. Tedros was first elected in 2017. 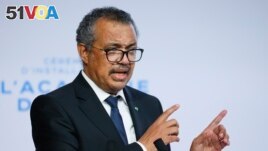 Tedros is a former government minister from Ethiopia. He is the first African to lead the agency and the only director-general who was not a medical doctor.

Tedros directed the United Nations health agency through its efforts to fight the worldwide COVID-19 health crisis. He was sometimes criticized for WHO policies related to the pandemic. But he also enjoyed widespread support among U.N. members.

Javier Guzman is the director of world health policy at the Center for Global Development in Washington. He told The Associated Press the WHO did experience some "mishaps" while dealing with the COVID-19 pandemic. However, Guzman said Tedros had kept a "steady voice" during the crisis and that he supported "equitable" policies.

Tedros has often been critical of wealthy nations who resisted sharing COVID-19 supplies with developing countries. He also called on drug companies to do more to make their vaccines available to the poor.

Guzman said that while some countries had concerns about Tedros' leadership, they were not willing to currently push for a change. "We are in the middle of the pandemic and there is some pressure for consistent leadership to take us through this difficult moment."

Some questioned his leadership during one of the biggest sex scandals in U.N. history. It involved accusations that dozens of workers managed by the WHO sexually abused young women in the Democratic Republic of the Congo during an Ebola outbreak that began in 2018.

None of the WHO managers who were told about the accusations and did little to stop the abuse have been fired. Tedros has been criticized for not holding the workers accountable for their actions.

As Tedros begins his second term, some experts have also raised concerns that the WHO is not completing its duty to provide science-based guidance to member countries.

Dr. David Tomlinson is a heart specialist who has campaigned for better protective equipment for health workers in Britain's health system. He told the AP he was surprised at some of the advice given by the WHO.

One example he gave was the organization's unwillingness to admit that COVID-19 is widely spread in the air. In July 2020, more than 230 scientists published a paper appealing to the WHO to recognize that the coronavirus was airborne. The paper later persuaded the WHO to change some of its guidance on the subject.

Tomlinson and others say Tedros and the WHO should aim in future health emergencies to get a full examination of the available science. "We need an agency that's unafraid to tell the truth, but that's unfortunately not what we have," Tomlinson said.

The Associated Press, Agence France-Presse and the World Health Assembly reported on this story. Bryan Lynn adapted the reports for VOA Learning English.

mishap – n. an accident or unlucky event that is usually not serious

equitable – adj. treating everyone in an equal way

scandal – n. an incident that shocks or makes people upset because it is morally or legally wrong