WHO Told to Quicken Its Response to Health Crises

Update Required To play the media you will need to either update your browser to a recent version or update your Flash plugin.
By Christopher Jones-Cruise
08 June, 2016


The World Health Assembly has directed its health agency to react faster and more effectively to health emergencies.

The UN has been reforming parts of the emergency health system for years, including its health agency -- the World Health Organization (WHO).

The Ebola epidemic in West Africa showed that WHO's response to emergencies needed to be improved quickly. Ebola was discovered in Guinea in March 2014. But it was not until five months -- and many deaths -- later that WHO said Ebola was an international public-health emergency. 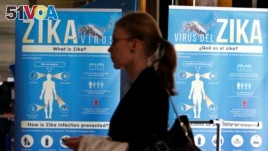 Material to prevent Zika infection by mosquitoes are displayed at the 69th World Health Assembly at the United Nations European headquarters in Geneva, Switzerland, May 23, 2016. (REUTERS/Denis Balibouse)

The aid group Doctors Without Borders has been sharply critical of WHO's response to Ebola. More than 11,000 people were killed by the disease before December 2015.

Joanne Liu is the president of Doctors Without Borders. She said she is pleased that a new plan has been announced. But, she says, it must be followed by action.

"The creation of the new WHO Health Emergencies Program is a positive step forward, but we know there is no quick fix," she said. "There is no cheap fix. So, without the ‘buy-in' of member states and strong leadership, it will die on paper."

WHO Director-General Margaret Chan said outbreaks of Ebola and other diseases must be dealt with soon after they begin or they will become a humanitarian crisis. She said WHO and its partners are working hard to deal with the Zika outbreak.

"The Zika outbreak is now [affecting] so many countries -- and not just in the Americas region, but Zika is at the doorstep of Africa now," she says.

"With movement of people around the world, this is the kind of thing we should expect. We need to be prepared so that every country has the capability and capacity to prevent, to detect and to respond to any emergencies."

Brazil has been most affected by the Zika outbreak. Thousands of cases of the Zika virus have occurred. Doctors say hundreds of pregnant women are carrying fetuses with microcephaly, which is linked to brain disorders from birth.

Brazilian Health Minister Fonseca Santos said his country has increased its monitoring program and is spending $250 million on research.

"The most important lesson," he says, "was that we should be prepared all the time, even for a disease that we are used to, and we believe sometimes that we know everything about it and it can still surprise us anytime and become an emergency."

Yellow Fever has spread from Angola to the Democratic Republic of Congo, which has confirmed 41 cases of people infected in other countries.

Bokenge Bosua works at the DRC Ministry of Health. He said his government has created a plan to prevent and prepare for the disease. He said a five-day-long vaccination campaign began last week in the capital Kinshasa.

"Also, we are focusing on mandatory vaccinations for travelers to Angola," he says. "Anyone who goes to Angola needs to be vaccinated against Yellow Fever."

We want to hear from you. Write to us in the Comments section, and visit our 51VOA.COM.

vaccinate – v. to give (a person or an animal) a vaccine to prevent infection by a disease