WHO: Drowning Among Top Causes of Death in Children

Update Required To play the media you will need to either update your browser to a recent version or update your Flash plugin.
By Anna Matteo
25 April, 2016

The World Health Organization (WHO) says drowning is among the top five causes of death for children under the age of 15.

The United Nations agency also found that boys and girls living near open water sources, such as ponds and irrigation ditches, are especially at risk. 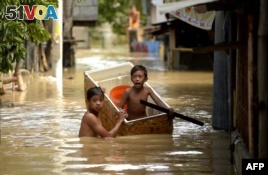 Children use a refrigerator as a boat to cross a flooded alley in Candaba, Pampanga, north of Manila, The Philippines, Dec. 18, 2015.

How serious is the problem in Asia?

Other studies have shown that, on average, drownings kill at least one child every 15 minutes somewhere in Asia.

Children in Asia are especially at risk in extreme heat during the summer and during the monsoon or rainy season.

Monsoon rains have already begun in western Asia. Heavy rains in Pakistan recently were blamed for killing around 100 people, including women and children.

The Asia-based group Alliance for Safe Children says drowning rates in developing countries are 10 to 20 times higher than those in developed countries.

The Alliance's survey found that Bangladesh has the highest rates of child drownings: almost 17,000 a year.

Vietnam followed Bangladesh with more than 11,500 child drownings a year. In Thailand, about 2,600 children drown each year.

Thailand's Disease Control Department recently reported that more than 10,000 children drowned from 2006 to 2015. That number represents a rate of 10 drownings a day.

In China, information for most provinces is not available. But in Jiangxi province alone, the Alliance discovered evidence of more than 4,600 child drownings a year. That is also a rate of 10 deaths every day.

Bill Kirby of Australia won a gold medal as a swimmer in the 2000 Olympics. He now leads swimming classes and training programs in Asia, mainly in Indonesia and Malaysia.

Kirby told VOA that governments and swimming organizations can work together to campaign for improved water safety.

"One of the first steps is actually to create a national body that looks after water safety, whether it be like [Australia's] Royal Life Saving or a Swim Australia or whatever it is -- that can actually get a lot of stakeholders together, get some government funding and promote water safety." 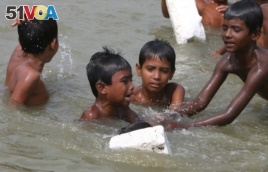 In Bangladesh many children swim in potentially unsafe water to escape the heat, May 2007, outskirts of Dhaka, Bangladesh. (AP Photo)

Kirby adds that swimming associations in Asia need to be better organized.

"I think, one of the things with the Asian countries, they're still yet to be as organized as the swimming associations or swimming bodies are like in the Western world, which probably had more time to be organized and have had government funding and they see the importance of it."

He adds that this is especially important in areas that experience what he calls "massive" flooding. He uses the word downpour to mean heavy rainfall.

"Massive flooding whether it's in Pakistan at the moment or I know in [the Indonesian capital of] Jakarta every year or every two years, they have such big floodings where all the waste goes into the waterways and they have a massive downpour and it floods, creating more opportunity for kids to drown."

Officials in Thailand have called on parents to teach children how to swim. They are also asking parents to keep a close watch on their children, especially during what they call the "risky" period: between the middle of the day and sunset.

The World Health Organization and others are urging countries to push for water safety and survival skills.

The WHO says measures should include

stakeholder – n. one who is involved in or affected by a course of action

association – n. an organized group of people who have the same interest, job, etc.