WHO Calls for Gene Editing Registration

Update Required To play the media you will need to either update your browser to a recent version or update your Flash plugin.
By Susan Shand
23 March, 2019

The WHO group was set up three months ago after a Chinese scientist announced he had edited the genes of twin babies. They met for the first time last Tuesday in Geneva, Switzerland.

The group said it had agreed on a way to set rules for gene-editing research. It also asked the WHO to start setting up a registry for such studies immediately. 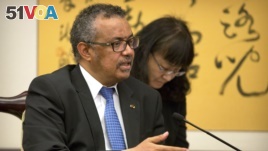 "The committee will develop...guidance for all those working on this new technology" said the WHO's chief scientist, Soumya Swamanathan.

Last year, a Chinese scientist claimed to have edited the genes of two baby girls. They were born to the same mother in the same pregnancy.

News of the births led to condemnation from around the world. Many people believed it might be the start of "designer babies," children whose genes have been edited to give them desirable traits or qualities.

Scientists and ethicists from seven countries called recently for a suspension of gene editing that would result in genetically-altered babies. They warned the process could have permanent and possibly harmful effects on human beings.

The WHO group said in a statement that any human gene editing work should be done for research only. It also said trials of gene-editing should not be done on humans.

The WHO's director-general, Tedros Adhanom Ghebreyesus, welcomed the group's plans. "Gene editing holds (great) promise for health, but it also poses some risks, both ethically and medically," he said.

The group said it aims over the next two years to produce governance rules for national, local and international officials to make sure that human genome editing science progresses within agreed ethical limits.

irresponsible – adj. said or done with no sense of responsibility

ethics – n. rules of behavior based on ideas about what is morally good and bad