Who Is the 'Breadwinner' in Your Family?

Update Required To play the media you will need to either update your browser to a recent version or update your Flash plugin.
By Anna Matteo
17 November, 2018

On today's show about English words and expressions, we are going to talk about bread.

Now, most countries around the world have some sort of bread in their food culture. 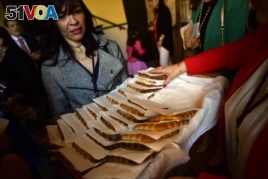 In Spain, this woman offers bread to people taking part in a ceremoney called ''Bread Procession of the Saint."

No matter what shape or flavor it has, bread sustains people. It not only helps them to survive but also to feel satisfied and comfortable.

Maybe that is how the word "bread" got its slang meaning. You see, "bread" -- and the raw form "dough" – both can mean "money."

In the song "I Get Around," the Beach Boys sing about "making real good bread" to attract women. And they do not mean a baguette!

If you make a lot of "bread" at a job, your employer is paying you well. On the other hand, if you are out of bread, you do not have any way to pay for your expenses. You are broke!

Using bread and dough this way may sound a little outdated. But you will hear it used that way. So, it's good to know. And bread meaning money is used in several English expressions.

Even though "bread" here means "money," the word breadwinner does not mean someone who has won money in a competition.

A "breadwinner" is a person who makes money for others. They are the ones who pay the bills in a family. They support or provide for dependents. So, we can also call a breadwinner a "provider."

Let's hear it used in this example.

A: I saw Elsa the other day. She looked so tired. What's going on?

B: She has a lot of pressure on her right now. Her parents are both really sick. So, she is now the breadwinner for her whole family!

A: Oh, wow! Doesn't she have a brother in college?

B: Yeah. And her grandfather lives with the family. So, she has to provide for all of them.

A: No wonder she looked so tired. She has to support a lot of dependents on one salary.

To throw another food expression into the discussion, the breadwinner in a family is also the person who brings home the bacon. These days, some people also use "cheese" to mean money. Put bread, bacon and cheese together and you have a lot of money not to mention a really tasty sandwich!

Now, if you are the sole breadwinner for your family, it is important that you keep your job. It would be cruel for someone to take the bread out of your mouth. That does not mean they stole your sandwich while you were eating it.

This expression means they took away your ability to make money -- your livelihood. And that would be terrible for your whole family! If you lose your livelihood you could end up on the breadline.

A "breadline" is a line of people seeking food from a charity or government agency. In the 1930s during the economic depression in the United States, it was common to see hundreds of people in big cities waiting on breadlines.

So, being "on the breadline" describes someone who depends on food donations to survive.

And that's the end of this Words and Their Stories. We do have some other "bread" expressions but they will have to wait for another time.

All the way from Washington Her breadwinner begs off the bathroom floor We live for just these twenty years Do we have to die for the fifty more? All night, He was the young American Young American, young American

Anna Matteo wrote this story for VOA Learning English. George Grow was the editor. At the end of the show, David Bowie sings "Young Americans."

In your language, does "bread" also mean money? Are the breadwinner in your family? Let us know in the Comments Section!

flavor – n. the quality of something that you can taste

slang – n. words that are not considered part of the standard vocabulary of a language and that are used very informally in speech especially by a particular group of people

dough – n. a mixture of flour, water, and other ingredients that is baked to make bread, cookies, etc.

broke – adj. not having any money

sole – adj. to be the only one