Update Required To play the media you will need to either update your browser to a recent version or update your Flash plugin.
By Ashley Thompson
25 August 2022


The number of monkeypox cases reported worldwide dropped by 21 percent in the last week. The drop marks a possible sign that the outbreak in Europe may be starting to decline, the World Health Organization (WHO) said Thursday. 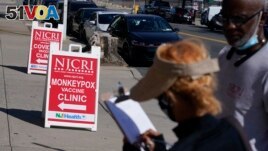 People line up to receive the monkeypox vaccine at a walk-in clinic at the North Jersey Community Research Initiative in Newark, New Jersey, Aug. 16, 2022.

The Africa Centers for Disease Control and Prevention said Thursday the continent had 219 new cases reported in the past week. That is a jump of 54 percent. Most were in Nigeria and Congo, the agency said.

In early July, the WHO's Europe director said countries in the region were responsible for 90 percent of all laboratory confirmed cases of monkeypox.

Britain's Health Security Agency said last month there was no evidence the disease was spreading beyond men who were gay, bisexual or had sex with other men.

Monkeypox outbreaks in Europe and North America were identified in May. Since then, the WHO and other health agencies have noted that its spread was almost all in men who have sex with men.

Monkeypox has existed in parts of Africa for many years. Experts suspect the outbreaks in Europe and North America began after the disease started spreading through sex at two parties in Spain and Belgium.

The WHO has recommended that men at high risk of the disease temporarily consider reducing their number of sex partners.

Monkeypox usually requires skin-to-skin or skin-to-mouth contact with infected areas on a patient's skin, called lesions, to spread. People can also become infected through contact with the clothing or bedsheets of someone who has monkeypox lesions.

Monkeypox vaccines worldwide are limited. Officials in the U.S., Europe and Britain have all begun decreasing the strength of the vaccine dose in order to stretch supplies.

The WHO has advised countries that have vaccines to offer the shots to people at high-risk for the disease first, including gay and bisexual men with several sex partners. They also advise vaccinating health workers and laboratory workers and others involved in controlling the outbreak.

While Africa has reported the most suspected deaths from monkeypox, the continent has no vaccine supplies available to the public. The only vaccines there are being used in a research study in Congo.

Ashley Thompson adapted this story for VOA Learning English based on reporting by The Associated Press.

dose –n. the necessary amount of a medicine or vitamin taken at one time