Update Required To play the media you will need to either update your browser to a recent version or update your Flash plugin.
By Kelly Jean Kelly
13 October, 2019

The government established Columbus Day as a national holiday long ago to honor the Italian explorer Christopher Columbus. It recognizes his arrival in what Europeans called the New World in 1492.

Today some U.S. cities and areas are moving away from honoring Columbus and instead celebrating the native peoples of North America.

Wisconsin is one of the latest areas to declare the second Monday in October Indigenous People's Day. Wisconsin's governor said earlier this month that his state recognizes and thanks tribal nations and native people. 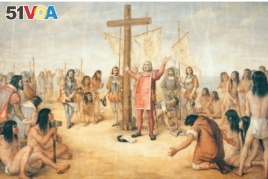 FILE -- This mural depicting Christopher Columbus, painted by Luigi Gregori on display at the University of Notre Dame, in South Bend, Ind.

The first reported celebration of Christopher Columbus's arrival took place in the United States in 1792. Later, some Italian-Americans began celebrating the Italian explorer as part of their cultural history. In the 1930s, Columbus Day became a national holiday.

But native people have long objected to honoring the explorer, note writers on the Smithsonian Institution's blog. They say that the arrival of Columbus – along with other colonizers – led to the deaths and forced assimilation of millions of native people.

They add, "Indigenous People's Day recognizes that Native People are the first inhabitants of the Americas ... And it urges Americans to rethink history."

Recently, the city government of Washington, DC approved a measure to honor Indigenous People's Day instead of Columbus Day, at least for this year. One of the supporters of the measure is politician David Grosso. He pointed out in a statement that Columbus did not discover North America, or even walk on the land that today is the United States.

Opponents of the measure said Italian-American voters did not like the idea of changing the name of the holiday. Others objected on social media to what they consider the re-writing of American history.

But supporters from many areas claim that celebrating Columbus as the person who "discovered" the New World is simply inaccurate. And, they say, honoring him as a hero ignores the violence, slavery, and disease his arrival brought to native Americans.

With Wisconsin, at least eight states have already moved away from observing Columbus Day. But it remains a federal holiday.

What do you think about this story? Do you favor Columbus Day or Indigenous People's Day? Leave us a comment below!

indigenous - adj. produced, living, or existing naturally in a particular region or environment

assimilation - v. to cause (a person or group) to become part of a different society, or country

inhabitant - n. a person or animal that lives in a particular place

inaccurate - adj. not correct or exact : having a mistake or error : not accurate