WHO Says Africa to Receive Vaccine Doses in March

Update Required To play the media you will need to either update your browser to a recent version or update your Flash plugin.
By Alice Bryant
23 January 2021


Many African countries are expected to receive their first COVID-19 vaccine doses in March from the United Nations' COVAX effort.

The World Health Organization's Africa director recently announced the plan. The statement comes as deaths on the continent from the disease have been rising.

COVAX is a plan from the WHO, the European Commission and France to vaccinate people in poor and middle-income countries against COVID-19. 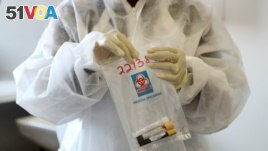 FILE - A health worker holds a COVID-19 sample collection kit of a vaccine trial volunteer, after a test for the coronavirus disease, at the Wits RHI Shandukani Research Centre in Johannesburg, South Africa, Aug. 27, 2020.

Matshidiso Moeti is the WHO Regional Director for Africa. She told reporters that a larger supply of the millions of doses from COVAX is expected by June. It is the second major vaccine announcement in one week for the African continent of 1.3 billion people.

Last Wednesday, the leader of the African Union said 270 million doses came from Pfizer, Johnson & Johnson and AstraZeneca through the Serum Institute of India.

African countries are now recording about 30,000 new virus cases each day compared to 18,000 during the first surge months ago.

John Nkengasong is director of the Africa Centers for Disease Control and Prevention, or Africa CDC. He has said that confirmed deaths from COVID-19 jumped 21 percent in one week in Africa, with more than 5,400 reported. The continent has more than 3.1 million confirmed virus cases, including more than 75,000 deaths.

South Africa is one of the world's hardest-hit countries. A highly infectious variant of the virus now makes up most new cases. The country has more than 1.2 million cases including 35,000 deaths.

The WHO's Moeti said gene sequencing tests have found the new variant in three other countries: Botswana, Gambia and Zambia. The importance of a strong genomics surveillance system cannot be overstated, Moeti said.

Africa CDC director Nkengasong said the fast-growing number of cases "means we run into short supplies of oxygen." He has been seeking to increase the supply to Africa, where medical oxygen is not easy to get.

Vaccine doses from the COVAX effort are expected to reach 20 percent of the population in Africa. Officials are pushing to secure enough doses to meet the goal of vaccinating the 60 percent needed to achieve herd immunity against the virus.

The vaccinations "will require a very massive historic campaign" of a kind that the continent has never seen, Nkengasong said.

There are already concerns about how African countries will be able to store vaccines that require extremely cold storage.

Nkengasong said African governments are being advised to get deep freezers to start the vaccinations at hospitals in large cities. They are advised to then bring people to those points to receive the vaccines.

dose – n. the amount of a medicine or treatment needed to treat a disease

income –n. money that is earned from work

surge –n. a fast increase in something

variant –n. something different in some way from others of the same kind

gene sequencing –n. a process that studies the order of DNA molecules to find out if organisms are related and to what extent

surveillance –n. to watch something very closely, especially to look for evidence of crime or disease

herd immunity –n. when enough people in a population can no longer be infected with a virus thereby protecting the rest of the people who are not immune from it