Update Required To play the media you will need to either update your browser to a recent version or update your Flash plugin.
By John Russell
01 November 2022


A recent report by the World Health Organization (WHO) says the number of people infected with tuberculosis increased worldwide.

The United Nations health agency said more than 10 million people around the world became sick with tuberculosis (TB) in 2021. That is a 4.5 percent increase from the year before. About 1.6 million people died, WHO said. It added that about 450,000 cases involved people infected with drug-resistant TB, 3 percent more than in 2020.

Dr. Mel Spigelman is president of the non-profit group TB Alliance. Spigelman said more than 10 years of progress was lost when COVID-19 appeared in 2020. 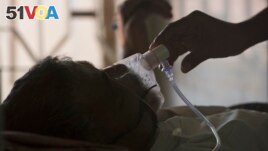 A relative adjusts the oxygen mask of a tuberculosis patient at a hospital in Hyderabad, India, March 24, 2018. Tuberculosis cases rose for the first time in years, says a report issued Thursday, Oct. 27, 2022 by the World Health Organization. (AP Photo/Mahesh Kumar A., File)

He said that although there were gains in some areas "we are still behind in just about every...goal regarding TB."

WHO also blamed COVID-19 for much of the rise in TB, saying the pandemic "continues to have a damaging" effect "on access to TB diagnosis and treatment." It said progress made before 2019 has since slowed, stopped, or moved back.

WHO also said COVID-19 restrictions, including lockdowns and physical distancing, also limited TB treatment services. Such restrictions may have caused some people to not go to health centers for fear of catching coronavirus.

Officials added that issues in the global economy also caused problems. About half of all TB patients and their families face high costs for their treatments. WHO called for more countries to cover all TB diagnosis and treatment costs.

After COVID-19, TB is the world's deadliest infectious disease. It is caused by bacteria that usually affect the lungs. The germs are mostly spread from person to person in the air, such as when an infected person coughs.

TB mostly affects adults, especially those who do not have enough food or have other health conditions like HIV. More than 95 percent of TB cases are in developing countries.

A WHO report said only one in three people with drug-resistant TB are receiving treatment.

Dr. Hannah Spencer is with Doctors Without Borders in South Africa. Spencer said, "Drug-resistant TB is curable, but alarmingly, cases are on the rise for the first time in years." She added, "It's urgent that shorter, safer and more effective treatments are scaled up now."

Spencer called for lowering the price of TB treatments so a complete treatment costs no more than $500.

WHO also said conflicts in Eastern Europe, Africa and the Middle East have worsened the choices for patients seeking TB diagnosis and treatment.

Ukraine had one of the world's worst TB epidemics even before Russia invaded the country in February. Health experts fear the inability of patients to get treated could fuel the rise of more drug-resistant TB across Ukraine and surrounding countries.

While TB patients can seek care in Ukraine, the country has seen a shortage of important medicines. Officials also have a hard time following the progress of patients.

John Russell adapted this from an Associated Press report.

diagnosis – n. the act of identifying a disease, illness, or problem by examining someone or something

cough –n. the reaction of forcing air quickly from your through usually from sickness in the lungs

scale up –v. (phrasal) to increase the size, amount, or extent of something

epidemic –n. a situation where an infectious disease spreads quickly among a population