Who Wants to Be a Billionaire?

Update Required To play the media you will need to either update your browser to a recent version or update your Flash plugin.
By Hai Do
22 October, 2018

Who wants to be a billionaire?

For a $2 ticket, people have a chance to win the Mega Millions record-breaking lottery jackpot of $1.6 billion. The drawing is on Tuesday night in the United States.

People also have a chance at winning the Powerball jackpot, which is now up to $620 million. That drawing will be on Wednesday night.

Mega Millions is a lottery game played in 44 American states as well as Washington, D.C., and the U.S. Virgin Islands. The winning ticket must match six numbers, from 1 to 70. Several states permit online ticket purchases. Out-of-state or overseas purchases are not permitted.

The first Mega Millions drawing was on May 17, 2002. That winner received a jackpot of $28 million – a small amount compared to this week's jackpot.

The most recent Mega Millions drawing on October 19 was for a jackpot of $1 billion dollars. But no one won. It was the 25th drawing in a row that did not result in a winner.

About 280 million tickets were sold for the October 19 drawing. Those tickets covered 60 percent of all possible number combinations. 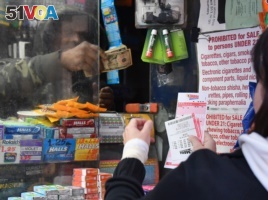 So, what are your chances of winning the $1.6-billion jackpot this time?

You are more likely to get struck by lightning than win the jackpot, at least in the United States. The National Weather Service says a person has about a 1 in a million chance of getting hit.

You are much more likely to get accepted to Harvard University. The Ivy League school accepted 5 percent of its 39,000 applicants for its 2021 class. That is a 1 in 20 chance.

Americans even have a better chance at becoming president than they do at winning this week's jackpot. The U.S. population is about 326 million. There are about 10 presidents in an average lifetime. So, a person's chances at becoming president are 1 in 32.6 million. However, the U.S. Constitution requires that a person be at least 35 years old and a "natural born citizen" to be elected president.

We want to hear from you. Write to us in the comments section and visit 51VOA.COM.

lottery - n. a way of raising money for a government, charity, etc., in which many tickets are sold and a few of the tickets are chosen by chance to win prizes

drawing - n. an act of choosing something (such as a winning ticket) from a group without knowing

applicant - n. someone who formally asks for something (such as a job or admission to a college)

in a row - phrase. following one after another