WHO Warns 2.5 Billion Will Have Hearing Problems by 2050

Update Required To play the media you will need to either update your browser to a recent version or update your Flash plugin.
By Mario Ritter Jr.
05 March 2021


The World Health Organization (WHO) warns that 25 percent of the world's population, or 2.5 billion people, will have hearing problems by 2050.

The warning came from the first-ever report on hearing from the United Nation's health agency. 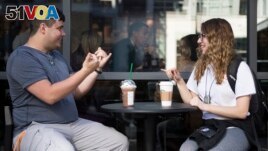 The report found that many of the causes of hearing loss are preventable. They include infections, disease, birth defects, too much noise and lifestyle choices.

To fight hearing loss, the report suggests measures which, it says, could cost what is equal to $1.33 for every person each year. WHO director-general Tedros Adhonom Ghebreyesus said the cost of doing nothing is very high, an estimated $1 trillion.

The U.N. researchers estimate that one in five people around the world already have hearing problems. But the report warned the number may increase to 2.5 billion people during the next 30 years. And 700 million would require some kind of treatment for hearing loss by 2050.

The report finds that, among those countries, 78 percent have fewer than one ear, nose and throat specialists for every million people. The numbers are similar for specialists who treat hearing, speech therapists and teachers for the deaf.

The report adds that even in rich countries, the ability to get hearing treatment is uneven. It said there is a lack of good information and a stigma surrounding hearing problems that prevents people from getting treatment.

"Even among health-care providers, knowledge relevant to prevention, early identification and management of hearing loss and ear disease is commonly lacking."

How to deal with hearing loss

The report proposes active measures for solving the problem. It recommends public health campaigns aimed at reducing loud noise. It also calls for increased vaccinations against diseases like meningitis which have been linked to hearing loss.

Other recommendations include systematic examination of people to identify problems at different points in their lives. For example, the report notes that 60 percent of hearing problems in children could be prevented. Programs to identify possible problems that target new mothers and babies can help too.

In addition, recent technological improvements, including easy-to-use tools, can identify ear disease and hearing loss at any age. It is now easier to carry out screening in difficult conditions like those found during the coronavirus health crisis and in "underserved" areas of the world.

stigma –n. a set of negative and often unfair beliefs held by people about something

relevant –adj. relating to a subject in a meaningful way